On Saturday Aug. 31, at 8 p.m. at the Chapel Restoration in Cold Spring, cellist Nicholas Dinnerstein and pianist Mikko Taylor will present an array of Soviet and post-Soviet music, composed by Russian and Finno-Ugric composers since 1965. A pre-concert discussion begins at 7:30 p.m. There is a suggested donation of $15, $10 for students and seniors. 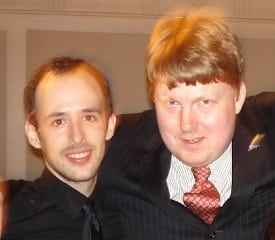 Included in the program are Alfred Schnittke’s ‘Suite in the Old Style’ and Arvo Pärt’s ‘Fratres,’ as well as premiere performances of Taylor’s own third and fourth cello and piano sonatas. Tying things together will be an excerpt from Dmitri Shostakovich’s concerto, op. 126, in the composer’s reduction for cello and piano.

A native New Yorker, now living in Boston, Dinnerstein has been active in solo, chamber, and orchestral settings as well as electronic and popular music. He has given solo recitals at Lincoln Center, premiered new music in Thailand, and remains very active in both the New York and greater Boston music scenes.

Primarily a composer, Taylor is a resident of Brewster, and the owner of a shop in Cold Spring. He has performed in St. Petersburg, Russia, as well as in Toronto and the New York area. Among other places, including the Chapel, his works have been performed at Lincoln Center and premiered in Finland.

Dinnerstein and Taylor, who both earned their degrees at the Mannes College of Music in New York, will return to the Chapel for a concert of similar music at 7:30 p.m. Oct. 19. Together with various colleagues, they will present Chopin, Shostakovich and Taylor’s chamber music with vocals.

HOW WE REPORT
The Current is a member of The Trust Project, a consortium of news outlets that has adopted standards to allow readers to more easily assess the credibility of their journalism. Our best practices, including our verification and correction policies, can be accessed here. Have a comment? A news tip? Spot an error? Email [email protected].org.