Created to raise awareness of area

Maps are going the way of books, electronic and accessed via a smartphone more often than not. First it was GPS units mounted on the dashboard, now those have even become obsolete, replaced by an app. A group of local residents are bucking the trend, though, and betting that if you make a map beautiful and fill it with context and history, even if it’s not necessarily spatially accurate to get from point A to point B, it will boost tourism and civic pride. On Saturday, Aug. 17, the first Hudson Highlands map was unveiled at a launch party held at the Antipodean Bookstore in Garrison’s Landing. 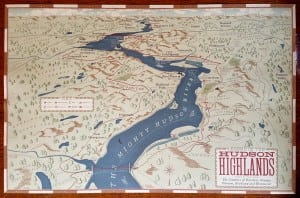 Chip Allemann, board chair of Glynwood and general manager of The Garrison and Highlands Country Club, noticed that so many visitors weren’t aware of all the interesting things to do in the area. He conceived of the idea of a new map delineating the Hudson Highlands area. “They call it the Hudson Valley or Lower Hudson Valley, no one even knows this is the Hudson Highlands area. It was a shame that this region, which is so dense with cultural and outdoor recreation destinations, didn’t have a recognizable identity,” said Allemann.

Allemann shared his idea with Deborah McManus, trustee of the D.J. McManus Foundation, Inc., who got excited and pledged to help make it happen. Their team effort eventually led to the D.J. McManus Foundation underwriting the project with the Hudson Highlands Land Trust acting as the fiscal agent. They engaged Nic Taylor and his partner and wife, J.B. Taylor, from Thunderwing Press, a Garrison-based design studio, to create and design the map.

The Taylors did all the research and then consulted with the Hudson Highlands Roundtable, a group of non-profit organization leaders in the area, for historical accuracy and attractions to highlight. “It’s an interpretive map and the boundaries are I-87 to the west and the Taconic State Parkway to the east, the Bear Mountain Bridge to the south and the Newburgh-Beacon Bridge to the north. There is more information in all directions on the map, but it doesn’t call out anything in detail beyond those boundaries. Since it isn’t a traditional aerial map that’s true to mileage, there’s a sense of forced perspective,” said Nic Taylor. 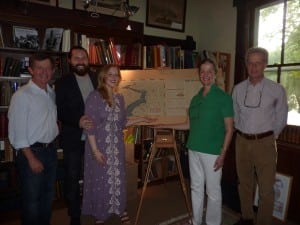 The perspective starts high above the Bear Mountain Bridge looking north and the Hudson River dominates the center of the map’s view, just as the river dominates the Hudson Highlands area. As well as being a beautiful rendering, the map also serves as a well-researched historical record, calling out highlights about agriculture, outdoor recreation, the Revolutionary War, art, and the environmental movement as driving forces that shaped our region. As a non-commercial map, it doesn’t include restaurant recommendations or shops, but it does have a key noting where restaurants are located.

The map will be sold for two dollars. Andrew Chmar, Executive Director of the Hudson Highlands Land Trust, said, “The idea wasn’t to make money from the project, but to use it as a tool to promote the area to visitors and also to residents.” J.B. Taylor from Thunderwing Press described the stacks of books that she and Nic read to research the Hudson Highlands area: “We wanted it to be both an invitation and an education about how many cool things there are to do here.”

For now, if you want a map that’s hot off the press, contact the Hudson Highlands Land Trust ([email protected]) or Thunderwing Press ([email protected]). Soon it will be available at local non-profits and many other locations. It’s useful for family trivia, too. For example, did you know that the Hudson River is the only fjord in America?