Tapping into creativity at The Gift Hut

Fran and Jim Farnorotto, owners of Cold Spring’s The Gift Hut, had enough experience in the retail field to know that there’s always turnover. No starry-eyed “wouldn’t it be great to open a small shop in a small town?” thoughts led them astray; instead their plan was to “find your niche, get yourself focused and stay with it. If you keep it fresh, people will come back,” according to Fran. Three years after opening their doors, they are thriving, their original concept of selling just gifts morphing into a much more varied mix of toys, strategy games and puzzles for all ages along with jewelry and other goods more in the traditional (and nontraditional) ‘gift’ vein. 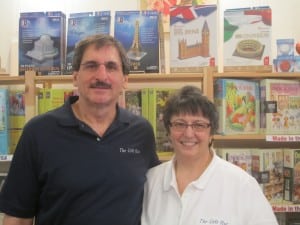 The Gift Hut’s proprietors, Jim and Fran Farnorotto, in front of their many puzzles.

Giving careful consideration to every item they stock, they try to adhere to their overall framework of “everything should have a purpose, so all the toys are hands-on and encourage creative thinking; there are no electronics,” says Fran, who acknowledges that technology has its place, too, just not in their store. In addition, they seek out eco-friendly merchandise and, whenever possible, products made in the U.S.A., not just giving lip service to either.

Fran continues, “In the beginning we started with the counter half-way back in the store, progressively we started adding things. We looked at our merchandise mix and thought about what customers were asking for. We try to find a balance and blend what we bring in. We don’t want to compete with the “Big Box” stores … we think hard about the merchandise we bring in; we don’t just throw things in the store. It must fit our goals.”

Between them, the Farnorottos have decades of retail experience.  Fran began working at a department store, where she came up through the ranks of merchandising and buying. Jim, on the other hand, started off in fast food management then migrated to working in a catalogue showroom. He left retail for 20 years, working in the electronics industry before returning to retail, repping gift lines. It was “all the samples we had lying around the house,” says Jim, “which led to our decision to try to sell them at a local flea market,” where they realized they could “do this so much better.”

It grew into a side-job weekend business (To this day they still maintain their “day” jobs, working seven days a week. Fran’s brother, Steve Merando, mans the store on Fridays. Their goal is to open the store more as they “edge toward retirement,” says Jim.) that slowly overtook their time and energy with two-hour load-ins and load-outs traveling to multiple flea markets from “spring until the cold came in and we said ‘no more.’” 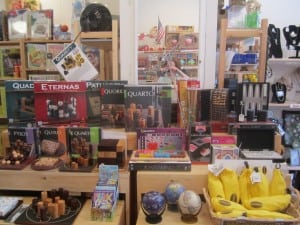 A selection of the strategy games designed for adults and teens available at The Gift Hut.

It was then that they decided to open up a store instead. Taking their time, visiting and researching different areas, including Rhinebeck, Beacon and Cornwall, their wish list of “a traditional main street, with foot traffic” led them back to Fran’s girlhood home of Cold Spring. “I grew up here,” she says, then transferred with work to Long Island, and eventually had the opportunity to move back to the Hudson Valley, and I grabbed it.”  Jim was born on Long Island, and moved to Dutchess County when he was 14.

Their Cold Spring location has brought them just the right mix of tourists and locals. “We get many repeat customers,” says Fran, and to entice them, there is a loyalty card which brings a 20 percent discount after 10 punches. They find that many locals don’t want to drive lengthy distances up or down Route 9. “If somebody needs something they call us and we get the store opened for them, even if it’s not within opening hours,” explains Jim. There’s a wish list for kids to fill in. Customers are always greeted upon entering, and browsing is very much encouraged, as it often leads to return visits where the purchases are made.

A tour round the store reveals the owners’ intent and purpose: creative, hands-on fun. “If children don’t get their creativity tapped into, they just don’t develop it,” says Fran, adding “a lot of what we have here is problem solving.”  Making their way back to the front, Fran and Jim point out some of their favorites, telling the stories behind them:

Toward the front of the store on the left side there are many different sets and kits for older children and teenagers, including solar rechargeable robot kits and science sets by Science Wiz, “made by a woman who is a Ph.D. and was concerned with keeping kids involved with science. Each kit has more than one project, and it walks them through each and builds scientific knowledge.”  Themes include energy, magnetism and physics.

Old-fashioned, original material toys are also stocked, including the traditional metal Slinkys and balsa-wood airplanes, bought by at least as many adults as children. For babies there are “Under the Nile” all-organic Egyptian cotton animals, all-washable, and a percentage of sales go back to the villages in Egypt where the workers mill the cotton. 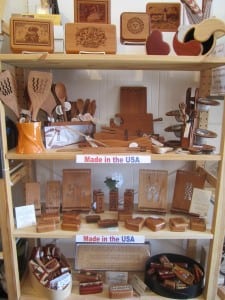 A sampling of the wooden gift items, all made in the USA, available at The Gift Hut.

Gift items for adults dominate the right side of the store. “Tavern Puzzle” products were designed by a trained blacksmith out of Long Island who began making them as a hobby; now he comes out with a new one each year. A large selection of wooden goods includes ingeniously designed spoons from Jonathan Spoons; keepsake containers with laser cut tops and pivoting elements from Heartwood Creations, and cutting boards from Beacon’s Jessica Wickham. There are magnets and key rings made from re-used bike chains and sprockets from a company in Oregon, glassware created from actual recycled glass bottles, and trivets and coasters made from marble tiles imprinted with maps of the Hudson region, printed directly onto the marble.

The Gift Hut stocks a good selection of strategy games for teenagers and adults, including chess and backgammon sets, Bananagrams, Katamino and Quarto. Puzzles line the rear right wall, with New Yorker magazine cover examples from the New York Puzzle Co. and 2014 calendar puzzles from Sun’s Out.

“We want to stay here,” says Fran. “We love the excitement of the kids and their parents, we’re hands-on with our customers.”