At an Aug. 21 workshop, Councilor Dave Merandy presented rough drawings for renovating Dahlia House, a small, vacant home behind Town Hall. The board wants to use the property, owned by the town government, for offices.

First, though, the house needs a thorough rehabilitation. “You’ve saved us a ton of time,” Councilor John Van Tassel told Merandy after seeing the drawings, which also included sketches for the American Legion, Dahlia House’s other neighbor.

For months, so far without clear results, Town Supervisor Richard Shea has negotiated with veterans over upgrading the legion building into a community center-senior center and town headquarters, with space for consolidated local justice courts and other civic purposes, as well as veterans’ activities.

Merandy offered to provide a more detailed version of his drawings and board members continued the “do-it-yourself” spirit by suggesting they undertake much of the basic Dahlia House rehabilitation themselves. Merandy, Shea, and Van Tassel are building-trades professionals. 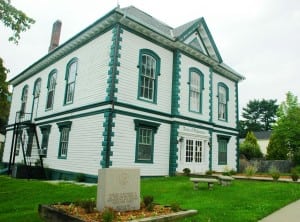 For Town Hall, the board talked about installing an elevator, perhaps in the space now occupied by the massive wooden staircase to the second floor, whose meeting room is difficult or impossible for those with physical handicaps to reach.

Shea proposed that once they get as far as they can with their rough drawings and ideas, they bundle the Dahlia House and Town Hall accessibility project into one job and issue a request for proposals for professional architectural-type assistance. “Let’s at least get somebody to design it all and get costs on it,” Shea said. “We can’t go on like this.”

Among other challenges of the current Town Hall space – a warren of small first-floor rooms that appear to have been inserted into the original 1867 downstairs – he cited the proliferation of paper: “A lot of it is multiple copies. We have filing cabinets everywhere. It’s ridiculous.”

The American Legion, right, draws Town Board interest as a possible community-senior center and government facility, as well as a place for veterans. File photo by L.S. Armstrong

Filing concerns led to talk of bringing in a mobile shredder van, perhaps in cooperation with the Lions Club, and allowing the public to use it as well. However, the board decided that sorting must precede shredding, with serious secretarial staff time devoted to determining what must be kept.

“There’s boxes and boxes and years and years of stuff” to review, Town Clerk Tina Merando observed. She promised to speak to the departments involved and report back on how to proceed.