The first curry I ever had was not a curry at all, at least not in the proper sense of the word. Curry is derived from kari, which means “sauce” in Indian, and this was not a sauce. It was a 1970s-style chicken salad made with scallions, tiny dried currants, and lots of gaudy yellow curry powder blended into the mayonnaise. It was delicious.

My second curry was curried goat made by some Jamaican friends and cooked outdoors in a cast-iron cauldron. The night was so dark that I could not see what I was eating, but who needed eyesight? This curry tasted so good I have spent 25 years wishing I could eat it again.

The third one that made an impact on me was the centerpiece of a dinner hosted to impress some boys by two of my college housemates, LA girls who knew long before I did the seductive power of cooking. They prepared a fascinating feast, with chicken coated in a thick, creamy yellow sauce as its centerpiece, and a dozen little condiment bowls all around holding things like sliced bananas, salted peanuts, chopped scallions, diced red pepper. I don’t recall whether or not their culinary prowess worked on their dinner guests that night, but as for me, I was definitely wowed by their cooking and could have married them both on the spot.

These days I do not use the word curry lightly. Because in my world, if you say “curry, ” someone is likely to ask, “Indian or Thai?” or worse yet, “Bengali or Maharashtrian?” and you’d better not flounder. That said, I do continue to use it inauthentically, to refer to dishes flavored with curry powder as well as more proper saucy things, whether Thai or Indian or West Indian. Or, for that matter, Afghani or West African or English. I just bother to know what I’m talking about before I speak.

So what am I talking about? It turns out, it’s not that easy to pinpoint. The wonderful author Harold McGee, in his book, On Food and Cooking, calls curries “the most complex and sophisticated puree sauces …” and goes on in his scientific-doting way to describe how the plant tissues (onion, ginger, coconut) are pulverized and the flavors then concentrated through frying before being used to infuse a variety of regional ingredients. 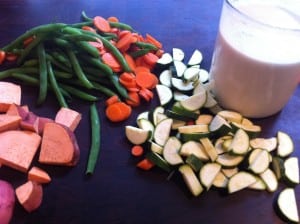 But the yellow-curry-powder-in-a-jar version has roots as well. The Dutch East India Company popularized the spice combination at the beginning of the 18th century. In 1889, after centuries of cultural appropriation had gone to the Europeans’ heads, the Universal Paris Exhibition set the exact composition of curry by decree.

That’s worse than us telling Italians how to make Bolognese sauce.

In the end, the important thing is never to let confusion about nomenclature or culture (or a sense of cultural superiority) get in the way of enjoyment of one’s food. Fortunately, we live at a time when a wide range of curries is available for a wide range of cooking moods and styles. If you are in a hurry, you can buy frozen curry dinners, yes. Better yet are the fresh-ish jarred sauces now sold in the refrigerated section of many supermarkets. You cut up some meat and vegetables (suggestions are on each jar), cook them up, add the sauce, and serve over rice. They are quite good, and thanks to them, my kids have grown up knowing curries the way that I grew up knowing pasta sauces. 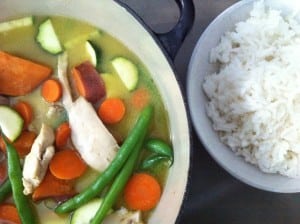 When I’m feeling adventurous, I make curry from scratch, starting with spices that I toast in a pan and then grind myself, plus fresh ginger and garlic, and any of a whole host of other ingredients.

The version of Thai curry I made at camp was a little easier than this. It used curry paste from a can that I sautéed then whisked with coconut milk and fish sauce before adding the vegetables and meat. It was a huge hit, so I made it the other night for my family. Sadly, the paste I found locally (from Thai Kitchen) wasn’t nearly as fragrant or spicy as the stuff I ordered from a catalog at camp, so the whole dish was fairly bland. Maybe you like it that way? My kids adored it. And I’m sure it’s authentic … somewhere.

Serve this with steamed jasmine or basmati rice. You can substitute tofu for the chicken, vegetable broth for the chicken broth, and soy sauce for the fish sauce, though with the latter, a key element of flavor will be lost.