Palace Living has been chosen as an official selection for the 2013 Beacon Independent Film Festival. The film, which won multiple awards this June during its world premiere festival screenings in NYC, will screen at 3:30 p.m. Saturday, Sept. 14. 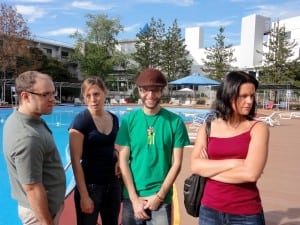 The story revolves around two 30­ish couples who retreat from stressful lives in New York City to a crumbling resort in the Catskills. Thematically, the film is about finding an adult identity during a challenging economic climate, as the characters make decisions about where to live, what careers and lifestyles to pursue, and who to partner with on that journey.

Palace Living was shot on location at Grandview Palace (formerly The Brown’s Hotel) in Liberty, N.Y. Several months after Palace Living’s production wrapped, Grandview Palace was destroyed in a fire. Thankfully no one was hurt, but it was the end of a Catskills landmark.

“We love Beacon, and we’re so excited to be part of this festival,” said Ordynans. “We shot most of the film in upstate New York, and the region is almost like a character in the movie. We are thrilled to have the opportunity to screen our film for an audience in the area.”