Throughout 1779, Benedict Arnold awaited judgment – ultimately by a military court – on questionable charges orchestrated by his political enemies. Desperate, he wrote to George Washington: “If your Excellency thinks me criminal, for Heaven’s sake, let me be immediately tried and, if found guilty executed … I ask only justice.” Nothing in his career shamed him so much as a court martial – except perhaps the verdict. In January 1780, he was sentenced to be reprimanded by his friend and supporter, Gen. Washington. Arnold was devastated.

Adding insult to injury, Arnold had continually pressed Congress for reimbursement of considerable personal funds expended on the war effort. Nor, in his four years of service, had Congress paid him a cent in wages. Finally, in April 1780, the Treasury Board allowed him a $51,993 credit, but denied $3,300 of his claim, paid no back wages, and found he owed the government nearly $2,400 for expenses incurred on his Canadian campaign.

During the long, disheartening year while he awaited his day in court, Arnold – a widower since 1775 – courted and wed the bright, beautiful Margaret “Peggy” Shippen, youngest daughter of one of Philadelphia’s leading Loyalist families. For more than two centuries, historians have argued whether Peggy and her Tory parents, Arnold’s unimaginably bitter feelings of personal betrayal by his country, a lifelong thirst for wealth and position, or a combination of the three drove him into the arms of the British. 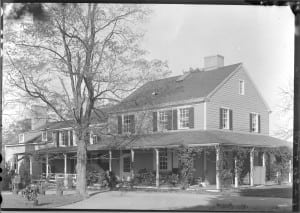 In any case, in early May 1779 – less than a month after his wedding – he established contact with Maj. John Andre, adjutant to Gen. Henry Clinton, commander of the British forces in America, with an offer to sell military intelligence.

For five months, through coded messages, Arnold and Andre circled each other warily, neither completely trusting the other, nor committing to each other’s terms: a sum of 10,000 pounds, in exchange for game-changing information. Frustrated, Arnold broke off contact in October.

In May 1780 Arnold reestablished communications with Andre and offered an irresistible prize: West Point, with its four major forts, a block house, 15 miles of hilltop fortifications overlooking the Hudson River, and a massive iron and log chain, approximately 1,500 feet in length, stretched across the Hudson. The strategically placed installations, a vital link in the flow of troops, supplies, and communications throughout the nation, blocked British ships from sailing upriver, and in Washington’s words, the “Key to America.” A British takeover would effectively split the country in two. As Gen. Clinton himself wrote, it would “finish the Revolution immediately.”

Arnold intended to be appointed commandant of West Point – and to turn the fort and its garrison over to the British – for which his previously proposed fee of 10,000 pounds would double. In addition, he asked for 10,000 pounds against loss of personal property, and a 500-pound annuity for life. Apparently, Arnold thought the price a bargain. In July, he wrote to Andre: “[T]wenty thousand pounds Sterling I think will be a cheap purchase for an object of so much importance.”

Meanwhile, Washington wanted Arnold back in the field – and assigned him command of the army’s left wing, an extraordinary honor. Arnold pleaded incapacity, however, and Washington relented, giving him the requested appointment at West Point. In mid-July, Arnold left Philadelphia for the Hudson Highlands. Rather than establish his home and headquarters on the west side of the river, at or near West Point, Arnold moved into an imposing frame and brick residence on the opposite side. Peggy and their new baby soon joined him. 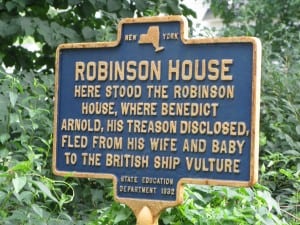 Historical marker of the Robinson House. Photo by R. Soodalter

Today a state historic marker on the east side of route 9D notes the site of the house, which stood in the shadow of Sugar Loaf Mountain before burning down in 1892. Before the war, the house had belonged to Beverley Robinson, who acquired it along with some 60,000 acres when he married Susannah Philipse, member of the wealthy Philipse family (hence the name – “Philipstown”). However, Robinson and his son became Loyalist officers, and in 1777, American forces confiscated “Robinson House,” along with the rest of the estate.

In mid-August, Clinton sent word through Andre that he would pay Arnold’s price in exchange for West Point. Still, crucial details remained unresolved. A rendezvous was arranged between Arnold and Andre, and on Sept. 21, the British sloop-of-war Vulture sailed up the Hudson, anchoring in Haverstraw Bay. Andre, red uniform hidden under a cape, was silently rowed to shore, where he and Arnold met for the first time. Arnold gave Andre various documents breaking down the forts’ defenses, troop strength, and weakest points.

After their meeting, Andre was to sail back to Gen. Clinton, waiting in New York City. But when the discussion ended, it was too late to row him back to the ship. He hid till the next night, by which time the Vulture had been fired upon from shore – and had sailed some ten miles downriver. Andre would have to return by land – behind enemy lines, in disguise, and carrying inflammatory documents, all of which Clinton had forbidden him to do.

Armed with a pass from Arnold in the name of John Anderson, a very nervous Andre crossed from King’s Ferry, at Stony Point, to the east bank of the river. On a borrowed horse and dressed in civilian clothes, hiding the plans in his boot, he spurred south toward his own forces. He rode nearly as far as British-held Tarrytown before three American militiamen detained and searched him. He would ride no further.