Returning from a summer break a week before students, the Garrison Union Free School Board of Education last week got an overview of enrollment levels, the search for a new superintendent, and testing results, and formally approved a tax levy of more than $8.8 million.

At the Aug. 28 session, Superintendent Gloria Colucci, who in July revealed retirement plans, announced a student population of 264 and gave grade-by-grade numbers for the 2013-14 academic year:

Although GUFS lost 20 students from 2012-13, 30 new students signed up, for a net increase of 10. “We had a burst of enrollment,” including a set of triplets, the superintendent said. GUFS does not have a high school. 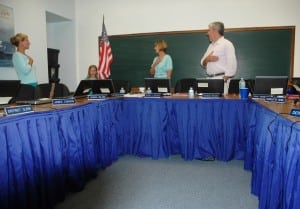 The Pledge of Allegiance heads the agenda at the GUFS meeting, with Superintendent Gloria Colucci, center left, and Board President Raymond O’Rourke, center right, joining in, alongside Board Member Theresa Orlandi, left, and a young flag-bearer. Photo by L.S. Armstrong

Two teachers join the faculty, and the openings generated a spate of applications – 1,189 for one position, and 1,200 for the other, Colucci told the board.

She provided a preliminary synopsis of Common Core curriculum test results. “All overall scores are lower for all districts in the state, including Garrison,” Colucci reported. “The tests were much more difficult” and the results do not mean students are learning less or slacking off in performance, she said, citing a state authority.

“We will be looking more closely” to determine where more attention is advisable, while also analyzing where things went well, she added, promising a full report after school officials thoroughly go over the data.

Board President Raymond O’Rourke outlined the process for selecting a new superintendent. He said officials from the Putnam-Northern Westchester Counties Board of Cooperative Educational Services (BOCES) will handle basic logistics but that the board anticipates substantial public involvement. According to O’Rourke, the board is “developing a transparent and very inclusive process” and intends to establish an ad hoc advisory committee of teachers, parents, and community members to address the question of “what are we looking for.”

Predicting that the number of parents wishing to serve would exceed the number of slots, he said GUFS would probably use a random method to fill the committee.

O’Rourke also foresaw problems in hiring one person to run more than one district. (Haldane likewise needs a new superintendent, with Mark Villanti retiring there.) “It’s very difficult to consolidate the superintendent positions of two otherwise independent school districts and still get the level of service and attention a single, devoted superintendent would provide either of the two districts,” he said.

On Aug. 30, he elaborated in an email, terming the idea of sharing superintendents “a solution in search of a problem,” from a GUFS perspective, given the record. “By any relevant measure, we continue to produce top-tier educational outcomes at less than half the median school tax rate of other districts in Westchester, Putnam and Rockland counties, even with a full-time superintendent,” O’Rourke said. “It’s hard to see why we would want to change the administrative model that’s helped produce such results.”

He also suggested that in sharing a superintendent with Haldane, three times as large, or Putnam Valley, six times bigger, Garrison would get short shrift. “That simply would not work for our students and community.”  Overall, he said, GUFS officials “looked at the question very carefully and concluded that Garrison is best served – as it has been – with its own superintendent. This is a more-than-full-time job, done without the staffs of assistant administrators employed in larger districts.”

Moreover, he said, sharing a superintendent likely “would also involve creating one or more positions at the assistant superintendent level, which would negate most, if not all, the potential savings coming out of a possible combination.”