Terence Edward“Terry” Leaves died in his sleep on Aug. 25, at his home in Cold Spring. He was 38 years old.

Born in Somerset in England, to Julie and Richard Leaves, Terry and younger sister Naomi were raised in the quaint village of South Petherton. As a child, Terry discovered his passion for the bicycle, exploring the hilly countryside around the village, riding farther and faster over the years. The tremendous skills and strength he developed on the bike showed a combination of drive, discipline and exuberance. 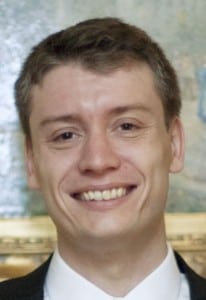 These qualities showed through in all of his activities, including earning degrees in mathematics and computer science at University of Oxford. From there he built an expertise in information technology and eventually became a “Quant” or quantitative analyst for the Fixed Income Research and Strategy Team at BNP Paribas, N.Y., where he had worked for the last twelve years.

When not ensconced in the nuances of higher mathematics, Terry relaxed with 100-mile rides. To meet other riders, he joined the New York Cycling Club where he became renowned for discovering new, scenic, low-traffic routes in and around the beautiful tri-state area. While on such a ride he met Shari Alexander.

Together they explored the hills and country roads, as well as the local food and fine beer of the Hudson Valley. They branched out by car as well as bicycle, and on a cross-country trip in 2009, Terry proposed to Shari at the summit of Mt. Evans in Colorado. Soon after being married they bought a house in Cold Spring, and enjoyed both city and country life.

Terry loved the peace of rural Cold Spring. From their home, they could hear the birds waking in the morning and could head any direction for beautiful terrain. Although a private person, he delighted in the company of friends. People in the community gravitated toward him, drawn by his cooking (he favored a five-alarm chili paired with exotic local micro-brews), his razor-sharp wit, his deep generosity and his ability to make others feel comfortable whatever the context.

When Terry learned that their sleepy Parrott Street would be inundated by 1,500 tiny ghosts, goblins and headless-horsemen each Halloween, he dove right in to this local custom, collecting dozens of giant spider decorations to transform the house into a haunted web – replete with candy for all of the little trick-or-treaters. For all of this and more, Terry will be deeply missed by his friends and family.

Terry will be buried in the Cold Spring Cemetery on Tuesday and a memorial will follow at a later date. He is survived by his wife, Shari Alexander, his parents Julie and Richard Leaves, his grandmother Marjorie Orme, his sister Naomi and her husband Craig Sinclair, and nephews Walter and Finlay.

Memorial donations may be made to the Environmental Defense Fund at edf.org.