Pete Seeger to perform in Peekskill

Inspired by the Pete Seeger song Where Have All the Flowers Gone?, an exhibition of 25 artworks will be on view at The Paramount Hudson Valley in Peekskill, beginning on the occasion of Seeger’s Return to Peekskill concert at The Paramount in partnership with WAMC radio. The art opening will be held from 5 to 7 pm. on Saturday Sept. 7. The concert will be held at 1 p.m. Sunday, Sept. 8. 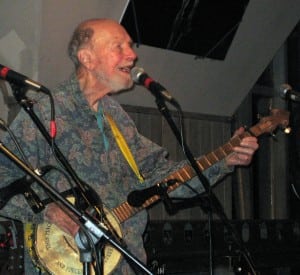 Where Have All the Flowers Gone? was written by Seeger in 1955, and published in Sing Out! Magazine. Additional verses were added by Joe Hickerson in 1960. The 1964 release of the song as a Columbia Records 45 single by Seeger was inducted into the Grammy Hall of Fame in 2002 in the Folk category. The song continues to be performed worldwide and recorded by many outstanding musicians.

The Paramount Hudson Valley Theater recently completed a series of major historic restoration and renovation projects. Originally built as a 1,500-seat movie palace by Publix Pictures, a subsidiary of Paramount Pictures, the Peekskill Paramount Theater first opened its doors with great fanfare on June 27, 1930. The Peekskill Paramount was constructed as a state-of-the-art facility unrivalled in the region and designed by the noted architectural firm of George and Charles Rapp. The Paramount building is a designated Westchester County Landmark, listed on both the New York State and National Registers of Historic Places.

The Paramount prospered for decades despite the Depression and World War II. However, Paramount sold the building in 1973. Eventually the building was acquired by the City of Peekskill in 1977, but in 2012 the Paramount shut its door until its new operator, Red House Entertainment, stepped forward in May 2013 with a goal to making this landmark theater a destination for the very best of live music and performing arts.

The Where Have All the Flowers Gone? exhibition is jointly organized by Amy Lipton of ecoartspace and Simon Draper of Habitat for Artists, both Hudson Valley based nonprofit art organizations.

One thought on “On View at The Paramount: Where Have All the Flowers Gone?”