The price of treason

After their fateful meeting on Sept. 21, 1780, Benedict Arnold left British Maj. John Andre to make his way back to his own lines as best he could. He little suspected how events would transpire over the next few days. Andre, seized in civilian dress with the plans for the capture of West Point in his boot, was soon to face espionage charges before a military court. The incriminating documents, found during the course of his arrest and search, had been turned over to the local commanding officer, Lt. Col. Jameson, and young Andre’s prospects were dire. 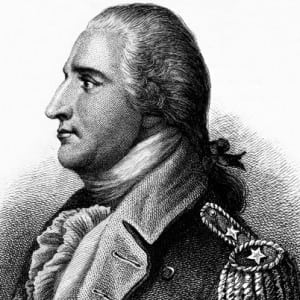 At Robinson House on the morning of Monday, the 25th, the Arnolds were preparing for a special occasion: Gen. Washington had sent word that he and his staff, which included Lt. Col. Alexander Hamilton and the Marquis de Lafayette, would be joining them for breakfast. Meanwhile, somehow unaware of the true nature of the confiscated papers, Lt. Col. Jameson immediately sent a dispatch, containing detailed information on the capture of “John Anderson” – Andre’s alias – to the senior commander on the Hudson: Benedict Arnold. When Jameson finally realized the true nature of the documents, he sent a second messenger, Andre’s papers in hand, speeding toward Washington himself.

As it happened, Washington, along with his staff, was delayed while inspecting the redoubts on the east side of the river, but he sent two aides ahead, joking, “I know you young men are all in love with Mrs. Arnold and wish to get where she is as soon as possible. You may go and take your breakfast with her, and tell her not to wait for me. I … will be there in a short time.”

At around 10 a.m., while breakfasting with the two aides, Arnold received Jameson’s first dispatch. Realizing that his capture was only hours away at best, he immediately rose from the table, and on the premise that he was needed at West Point, called for a horse to be saddled without delay. After bidding a hasty farewell to Peggy, he rode north 100 yards along the lane that is now Route 9D, to the steep footpath on the left that led to the river, and the landing known as Beverly Dock.

He sped down the path, to the barge that had previously served to convey him to and from West Point. This time, however, he ordered his nine unsuspecting crewmen to row the 18 miles downriver to where the Vulture lay at anchor. When they finally drew alongside the warship, Arnold invited them on board, where they were immediately declared prisoners of war. 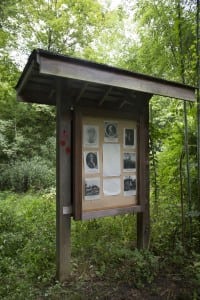 A brief history of Benedict Arnold is positioned along the trail.

Jameson’s second messenger, carrying Arnold’s documents, caught up with Washington at Robinson House around mid-afternoon. The news of Arnold’s treason struck like a thunderbolt. Washington was especially devastated at his trusted friend’s betrayal; reportedly, he wept. He sent word to capture Arnold alive, if at all possible, so that an example might be made of him.

By this time, however, Arnold was safely ensconced within British lines. Convinced that Peggy was unaware of her husband’s plot (although historians now agree that she was deeply involved), Washington graciously allowed her to take her baby and leave under escort, for either Philadelphia or New York.

Arnold was received politely but coldly by Clinton and his officers. The capture of Andre was of grave concern to them; an intelligent and urbane young man, Andre was much loved and valued by his comrades. As for Arnold, Clinton had his own generals, and he would rather have had Andre safely back than the failed author of a treasonous plot. And when Andre was hanged at Tappan less than two weeks later, Arnold’s cache among the British suffered even further.

Arnold could not escape the taint of treason. Although he served as a British general following his escape, he was never popular with the troops, and Gen. Clinton continually ignored his advice. In America, the demonization of Arnold began as soon as his treason became known, and has continued to the present day. Benjamin Franklin wrote, “Judas sold only one man, Arnold three millions.”

After the war, Arnold and his family moved to London, where he was frequently vilified in the press, and in Parliament – in one instance, resulting in a bloodless duel. Money – or the lack of it – continued to be a challenge. As he discovered soon after fleeing America, no arrangements had been made for payment in the event of failure. Ultimately, he would receive considerably less than anticipated had his plot succeeded. Forced to live on an officer’s peacetime pay, he was unable to secure a military assignment, a government post, or a position with the prestigious East India Company.

Through the 1780s, the Arnolds moved back and forth between London and Eastern Canada, their lives marked by debt, a seemingly unending series of lawsuits, and declining health. Arnold died in London on June 14, 1801, at 60. Peggy – who had stood by him through the vicissitudes that comprised their lives – died just three years later, of symptoms indicative of uterine cancer. She was 54. Before her death, she managed to settle all her late husband’s debts. 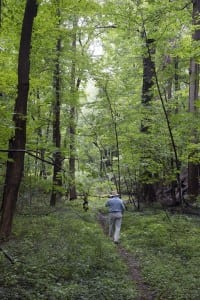 The author walks the route taken by Benedict Arnold to flee to the Hudson River for his escape.

Scholars have dissected Benedict Arnold’s character for over two centuries. Brave and resolute though he was in battle, Arnold was a seriously flawed man. He was a political naïf, and it cost him dearly. He was also arrogant, intolerant, and vainglorious. He made enemies easily, and he managed always to couch his actions – including the most sordid act of treason – in such a way that the fault never lay with him. Ultimately, a man is judged by his actions, and Arnold did, in fact, come within a hair’s breadth of compromising America’s bid for independence. Perhaps the most fitting epitaph was spoken by a former private who had fought under him during his best years:

“Arnold was a fighting general, and a bloody fellow he was! He was a stern looking man but kind to his soldiers. He was as brave a man as ever lived! They didn’t treat him right … but he ought to have been true.”

Most of the escape path that Benedict Arnold rode from Robinson House to the river still exists, and is open to hikers, courtesy of the Hudson Highlands Land Trust. Drive south on Route 9D, and make a right on Glenclyffe Road, at the Garrison Institute sign. Take a left into the Community Center parking lot. A wide path with a chain across it runs downhill at the immediate left of the parking lot; step over the chain, and follow the trail down to the historic kiosk, which tells the story of Arnold’s betrayal and flight. (Note: the print is weather-faded, and hard to read.)

Walk the trail as it descends past stands of bamboo, and ultimately takes you to an overlook above the railroad tracks, from which you can see the spot where Arnold boarded his barge. Unfortunately, Metro-North doesn’t allow people to cross the tracks, so the site of the historic Beverly Dock itself is inaccessible. The hike to the overlook should take 20-30 minutes – unless you’re on a fast horse and running for your life!

One thought on “Benedict Arnold: From Patriot to Pariah, Part IV”