The City of Beacon plays host to an active social scene on most weekends but September’s Second Saturday is looking like a particularly dynamic affair, including a three-day film festival, numerous art openings, notable live music, and other cultural happenings.

In conjunction with Fovea Exhibitions’ current photography exhibit, The Gun Show, curated by TIME photo editor Neil Harris, participating artist Erin Trieb will discuss her assignment documenting the 2013 annual meeting of the National Rifle Association in Houston, Texas. The event, which is open to the public, begins at 6:30 p.m. on Saturday and will be followed by a Q-and-A with Trieb. 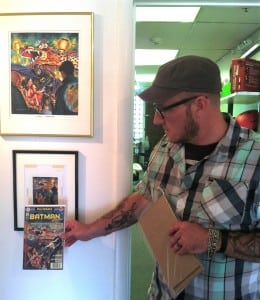 One of the city’s newest art galleries, Short Walls, will be exhibiting the work of American painter and comic book artist Joel F. Naprstek, who has contributed to superhero titles at DC Comics, Marvel, Dark Horse, Pulp Adventures and other publishers.

Matt Held runs Short Walls from inside his new skateboard shop, Tastes Like Chicken.  A painter from Brooklyn via Seattle, Held opened the shop in Beacon last May, after moving here with his family. In keeping with the skate aesthetic, he curates exhibitions that showcase street, graffiti and counter-culture art with an emphasis on selecting artists whose work shows an expertise in craftsmanship and visually vibrant narratives.

“Skate culture and comic culture share quite a few similarities. It’s all about the art. Growing up, as with so many other little boys, I was fascinated with comics. They were my first lessons as a budding artist,” said Held. “Joel, who will be at the gallery on Saturday, is a painter working in a traditional style during a time when most art is completed on the computer. In his show, we have his small watercolor sketches next to the finished acrylic paintings, giving a bit more insight into the workings of the artist.”

A few blocks down and on the other end of the art style spectrum, August Ventimiglia’s minimalist work will be showcased at Matteawan Gallery, 464 Main St. A solo show curated by gallery owner Karlyn Benson, Borrowed Lines incorporates found books that have been deconstructed and reconfigured into a more abstract form and chalk line drawings the artist produces by snapping a string coated with blue chalk on paper. The opening is from 6 to 9 p.m. on Saturday.

Going even further into the realm of conceptualism, Utopian artist James Antonie has produced a Micro Retrospective of his work at Catalyst Gallery, 137 Main St. For more than 30 years Antonie has been investigating issues of scale in art through a variety of media and styles. In 1975, he created The Micro Gallery, architectural models of exhibition spaces with portable moveable art exhibits. The show at Catalyst, opening on Saturday from 5 to 8 p.m., represents the full scope of the artist’s ideas and work. 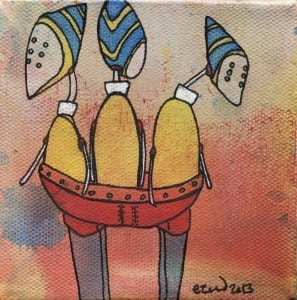 Albitrinohme is one of ezerd’s robots available for adoption at Dream In Plastic. (Photo courtesy of the artist)

Dream in Plastic, at 177 Main St., will host a Robot Adoption event from 6 to 9 p.m. on Saturday, at which the artist “ezerd” will be unveiling original paintings on canvas. “On Saturday, I will be releasing from Earth quarantine the latest robots that are up for adoption,” explained ezerd. “The robots’ systems have been graded to current Earth-compatible standards. When you adopt one, not only are you opening up your life to their friendship, love, silliness, quirks and antics, but 100 percent of the proceeds go directly to bringing more robots into loving homes.”

Across the street from Matteawan Gallery, the Howland Cultural Center, 477 Main St., will present Scott Beall and Friends, a collaborative musical project of Beall’s original compositions. A Beacon resident for more than 10 years, Beall is the founder and leader of San Francisco’s Chain of Fools show band and, as a guitarist, has shared the stage with Huey Lewis, The Tubes, Stevie Ray Vaughan, Billy Idol and many others.

Joining him live on Saturday is Jim Cammack on bass and Nadav Snir-Zelnicker on drums. The performance, which may bring out some surprise guests, begins at 8 p.m. Tickets are $12 at the door. Be sure to arrive early to check out Latino Artists of the Hudson Valley, an exhibit currently on view at the Center. The works of 14 different artists are on display until Sept. 29. 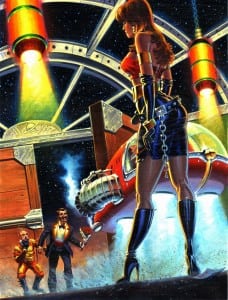 “Deja” by Joel Naprstek (Photo courtesy of the artist)

The first-ever Beacon Independent Film Festival kicks off at 7:15 p.m. in the theatre at the University Settlement Camp on Friday, Sept. 13, with a screening of Ain’t In It For My Health: A Film About Levon Helm. The schedule on Saturday, Sept. 14, includes a series of short films beginning at noon, a panel discussion on technology’s influence on the art of filmmaking at 1:30 p.m., and feature film presentations beginning at 3 p.m., including Zack Ordynans’ Palace Living and Joe Glickman’s Kings of Coney Island.

Sunday’s lineup features the documentary Kivalina People, a documentary about a tiny island 130 miles above the Arctic Circle, at 12:15 p.m., and Bottled Up, Beacon resident Enid Zentelis’ feature film starring Melissa Leo that world premiered at this year’s Tribeca Film Festival, at 3 p.m. All screenings on Saturday and Sunday feature a post-projection Q-and-A with the director.

To stay focused amidst the swirl of activity, liquid sustenance is recommended. On Saturday from 3 to 6 p.m., Artisan Wine Shop, 180 Main St., will be pouring Great American Terroir, with a focus on sustainably and organically grown wines vinified with minimal intervention. Offerings include the 2011 Finger Lakes Chardonnay from Eminence Road Farm Winery, which is sustainably grown, unfined and unfiltered, followed by three reds from Broc Cellars: the 2012 Umpqua Valley Gamay from Oregon, the 2012 California Valdiguié, and My Essential California Red Wine 2010, a blend of cabernet sauvignon, cabernet franc, syrah, petit verdot and merlot. Wine tastings are paired with small food dishes prepared in Artisan’s in-store kitchen.