Secures three lines for Nov. with no Dem in race

Three-term incumbent Sheriff Donald B. Smith displayed resilient political strength in winning the Republican primary for sheriff held Tuesday (Sept. 10). According to unofficial results from the Putnam County Board of Elections, Smith won with a commanding 2,193-1,329 over challenger Kevin McConville. 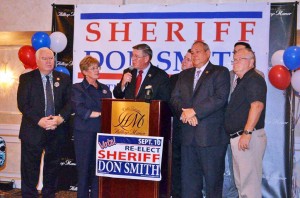 There were only just over 3,500 votes cast out of a pool of more than 22,000 registered Republicans in the county. Cold Spring resident McConville had said at the outset of the race that he was running against Smith for a second time (he ran as a Democrat in 2009) with the encouragement of many Republicans who believed the sheriff’s office needed new leadership. In the end, few party members seemed very interested in the contest and for those that were Smith was the clear favorite.

Adding to Smith’s impressive results, a write-in challenge to McConville’s presence on the Conservative Party line appeared to be successful and it was a clear grass-roots rebuke to that party’s leaders who supported McConville. Smith is the likely write-in victor in that race and if so would mean that McConville will not appear on the November ballot.

Smith also fended off a challenge to his nomination on the Independence Party line, meaning that with the absence of a Democratic candidate he will likely be the only name on the line for sheriff when voters go to the polls in November.

In an interview with The Paper Smith said “I am elated with the results. I have always felt a strong bond with the people of Putnam and I believe it goes both ways. I work hard to provide the best law enforcement. People know me and trust me.

While grateful for the victory from Republicans, Smith said he was particularly touched by the efforts of Conservative party members. “I am overwhelmed by their effort in standing up against their party leaders and supporting someone with real conservative principles.  They have sent a message about taking back their party,” Smith said.

Even with his triumph in dispatching his intra-party opposition, as the county’s chief law enforcement officer Smith will still face the after-election challenge of finding a way to work effectively with the county’s chief prosecutor, District Attorney Adam Levy. The two men’s relationship has deteriorated to the point that Levy a few weeks before the primary filed a civil lawsuit against Smith alleging a number of misdeeds in the conduct of his office. The suit stems from the arrest for rape of a man who was a friend and frequent house guest of Levy’s.

Although he said the suit was not politically motivated, Levy acknowledged in an August press conference that several of his family members had contributed to McConville’s campaign and if law permitted him he would support McConville as well. The Sept. 10 primary results will no doubt provide Levy with reason for a political reassessment.

Both officials claimed at the time of the lawsuit that their offices continue to cooperate in a professional manner.