Cassiopeia, Stuffin, Floopey, Daniel, Pieces, Sadie, Sparkler and Atlas. These are the eight cats that lost their lives in a fire on Saturday that blazed through the Isolation Ward of Mid Hudson Animal Aid’s cat sanctuary in Beacon. All humans at the scene were unharmed as were most of the no-kill shelter’s 160 abandoned or abused cats and kittens. Even so, much of the facility will have to be either partially or fully rebuilt. Staff and volunteers at the shelter are heartbroken over the loss of their furry friends, some of which are still missing. 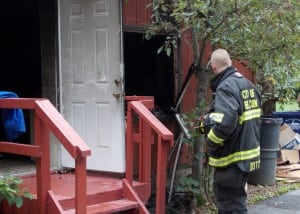 A member of the City of Beacon Fire Department surveys the damage from Saturday’s blaze at Mid Hudson Animal Aid. (Photo by MHAA Board President Don Petruncola)

At approximately 11 a.m. on Saturday, Sept. 14, a cacophony of sirens blared across Beacon’s east side. Within minutes, trucks from four different fire departments in the area were lined up on Simmons Lane, which leads to the property Mid Hudson Animal Aid (MHAA) shares with the Animal Rescue Foundation (ARF). Several more cars and trucks were parked along the shoulder of Wolcott Avenue/Route 9D: a small army of first-responders, including Hudson Highlands Veterinary Medical Group, Roosevelt Animal Hospital, Animal Kind, Pets Alive, Hudson Valley SPCA, Ulster SPCA, and lots of volunteers.

Saturdays are traditionally the busiest day of the week for shelters and vets. That morning, MHAA was already short-staffed because of two separate feline emergencies, leaving employee Audrey Lodato and a few volunteers to confront the fire that had started in the Isolation Ward, the one room in the free-range facility where cats are caged. Also in the building were three moms with their daughters, helping out that day.

“Audrey was a hero,” said MHAA Board member Nancy Hill. “When she saw the fire, she opened all of the cage doors and kicked out all of the window screens so that the cats could escape.” With the help of a volunteer named Jennifer, Lodato safely evacuated everyone from the building.“I was just doing my job,” said Lodato, with tears in her eyes. “Hands down it was the worst day of my life.” 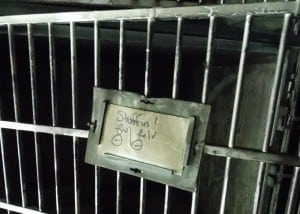 The former Isolation Ward cage of Stuffin, who died in the fire. (Photo by Don Petruncola)

Three cats – Midget, Twinkie and Ernie – were rushed to the Emergency Room at Hudson Highlands Veterinary Medical Group. Fireman Gary Simmonds, from Beacon, resuscitated Twinkie on site via animal CPR. By Monday, all three cats were taken off the critical care list.

Building fires are indeed traumatic. If you’re running a non-profit animal rescue operation on a $250,000 annual budget, it can be financially devastating. Renovations will be required throughout the facility. The Isolation Ward will have to be completely gutted and rebuilt. There is additional smoke and water damage in the Great Room, where the cats cohabitate, and in the attic. All of the shelter’s medical supplies were lost in the fire and already-discounted emergency medical bills need to be paid.

“One thing to keep in mind is replacing the cages,” said Hill. “When an animal is recovering from surgery or a respiratory infection they have to be caged separately. The cost for replacing them will be in the $10,000 range.”

“Part of being a sanctuary is providing enrichment,” added Lodato. “Those cages were custom-built about 10 years ago to ensure that cats who need to be quarantined for long periods of time are happy and comfortable.”

The surviving cats were all placed in temporary foster care within 24 hours of the fire, but MHAA is still keeping a list in anticipation that many will need to be re-assigned. Cats in foster care that are showing delayed signs of smoke inhalation are being routed to the closest veterinary facility.

Monetary donations to MHAA can be mailed to 54 Simmons Lane, Beacon, NY 12508, or made via the website at midhudsonanimalaid.org. Donations of wet and dry cat food, towels, litter and cleaning supplies are also needed and can be delivered to two temporary drop-off locations in Beacon: 18 Slocum Road and 35 Boyce St. 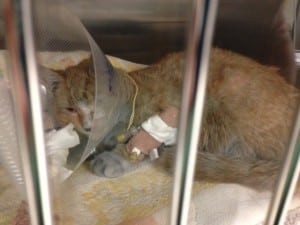 Twinkie, who was resuscitated at the scene of the fire, recovers at Hudson Highlands Veterinary Medical Group. (Photo courtesy of HHVMG)

MHAA needs volunteer drivers to help shuttle the animals, as well as people with construction skills, such as electricians and plumbers, to help with the rebuild. The phone system at the shelter is currently down but hundreds of emails are still coming through. Staffers are asking for patience as they try to respond to all inquiries.

“Catoberfest 2013,” MHAA’s 2nd annual fundraiser, was already on the calendar before the fire. This year’s event is from 7:30 to 9:30 p.m. on Tuesday, Oct. 1, at The Hop, 458 Main St., Beacon. Admission is $40 and includes a buffet dinner of The Hop’s cuisine, a craft beer sampler, dessert, and live music by The Judith Tulloch Band. A cash bar is also available for The Hop’s large selection of beer, wine and assorted beverages. Tickets are available online at Brown Paper Tickets or by contacting Mid Hudson Animal Aid at [email protected].

Hill is overwhelmed by the response and generosity of the surrounding community. “I was talking to the event coordinator of Spirit of Beacon Day, which is on Sept. 29, and I said, ‘Of course we’ll be there!’ That spirit is in our parking lot right at this moment,” she said. “It’s driving past us constantly, with people leaving donations of all kinds and people wanting to foster. It’s been amazing.”