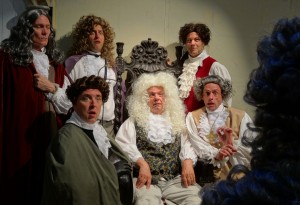 County Players opens its 56th season with Bach at Leipzig at 8 pm. on Friday, Sept. 20.

Leipzig, Germany, 1722: Johann Kuhnau, revered organist of the Thomaskirche, suddenly dies, leaving his post vacant. In order to fill the position, the city council invites a small number of musicians to audition for the appointment, including Johann Sebastian Bach. This, however, is not his story. In this hilarious farce – the 18th Century’s American Idol (on steroids, in tights and with swords)—Bach at Leipzig imagines with uncommon intelligence and wit how six little-known musicians resorted to bribery, blackmail, and betrayal in an attempt to secure the most coveted musical post in all of Europe.