Depot Docs’ eighth season opens with a bang, not a whisper, on Friday, Sept. 27, when the multiple award-winning, Academy Award nominee for best documentary feature Murderball, crashes onto the Depot Theatre screen. 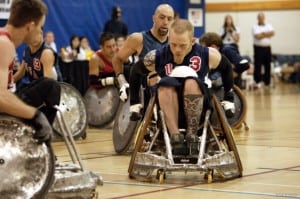 A scene from Murderball

Crashes, and with a bang yet? Well, we’re talking here about the film co-directed by Henry Alex Rubin and Dana Adam Shapiro – Shapiro will be the Depot Docs special guest – that takes an unexpurgated look at a sport played by young athletes in wheelchairs designed for speed and collision. Invented by Canadians in the 1970s as a team sport for players with functional impairments in both upper and lower limbs – most are medically classified as quadriplegic – murderball was introduced in the U.S. in 1981. In the late 1980s, with teams competing in more than 20 countries, the name was changed to wheelchair rugby, or, as it’s known in the U.S., quad rugby.

Wheelchair or quad, Shapiro and Rubin (the cinematographer) bring us close to the action, which bears little resemblance to rugby football except that scoring requires carrying the ball over a goal line, and no one wears helmets. The International Wheelchair Rugby Federation puts a finer point on the matter, saying it’s the ethos of rugby that’s in play: it’s intense and raucous, even brutal. And just in case there’s any doubt about what that means for people with spinal cord injuries, cerebral palsy, muscular dystrophy, amputations, polio, and other neurological conditions, there’s the IWRF slogan: “Wrecking Wheelchairs Around the World Since 1977.”

Say what? That was Shapiro’s response when he saw an article about quad rugby players, and the rivalry between two competing teams that challenged all of his stereotypes about what quadriplegics can do, how they behave, and whether they could actually be … jocks! So he pitched the idea of an article about the upcoming Wheelchair Rugby World Championships in Sweden to Maxim magazine, and the idea of a film to a producer friend, who introduced him to documentary filmmaker Rubin. Three years later, they had the film in the can, and the Sundance Film Festival Documentary Audience Award on the wall.

Although in wheelchair rugby male and female athletes compete on the same teams and in the same competitions, Murderball focuses on the men chosen to play on Team USA for the Paralympic Games in Athens, many of whom Shapiro and Rubin had gotten to know covering the World Championships. And while the film covers all the inspirational sports movie tropes, with training montages, intense rivalries, the build to the championship, the ecstasy of victory, the agony of defeat, etc., what takes it to an entirely different level is the context: these athletes, once confined to and by their wheelchairs and their disabilities, have found that they don’t have to be defined by their condition or their circumstances.

Mark Zupan, one of the premier players featured in the film, who was paralyzed in a car accident at the age of 18, was asked after a festival screening, “If you could, would you turn back the clock on that day?” “No,” he said, “I don’t think so. My injury has led me to opportunities and experiences and friendships I would never have had before. And it has taught me about myself. I’m a guy in a chair. I’m just like you, except I’m sitting down. In some ways, it’s the best thing that ever happened to me.”

Such exemplary wisdom might be hard to swallow if the filmmakers hadn’t won the trust of the men, and been allowed into their lives off the court, with the confidence that they’d be seen just as they are, without the pity or embarrassment or unease which usually characterizes the treatment of the disabled. The danger, of course, is that such strength in the face of such adversity can make it seem, oddly enough, easy, caricaturing the men as superheroes. Wisely, the filmmakers decided to follow a young man, Keith Cavill, who was in the early stages of recovery from a motocross accident. “This film is ultimately about loss, or about triumph over loss,” Shapiro says, “and we had lots of triumph but very little loss until we found Keith.”

One of the most moving sequences of the film is a reminder that not all such loss is random or accidental, but an effect with a human cause. Team USA visits Walter Reed Army Medical Center in Washington, D.C., and interacts with veterans from the war in Iraq, where many have survived devastating wounds from improvised explosive devices and conventional ordnance, only to return home with permanently broken bodies and badly shattered lives, in wheelchairs. If the quad rugby athletes can model courage and the will to be the best you can be with whatever you’ve got to work with, who better to bring healing to these vets? And whether your wounds are physical or spiritual, when you hear quad rugby star Bob Lujano’s motto: “No arms, no legs, no problem,” can you feel sorry for yourself?

Murderball will be shown at 7:30 p.m. at the Philipstown Depot Theatre, Garrison’s Landing. There will be a Q-and-A and reception after the screening with co-director Shapiro. For reservations (advised), directions, or more info, call 845-424-3900.