Depot Docs (DD) will begin its eighth season at 7:30 p.m. on Friday, Sept. 27, with a screening of Murderball (see accompanying story). The always-packed documentary film showings at the Depot Theatre have developed a devoted following; many Philipstowners wouldn’t miss a single film of the five or six shown each season.

Choosing films is the domain of the seven-person programming committee, all living locally and working in some capacity in the film industry. Headed by documentary filmmaker (with work shown on PBS and HBO for the last 25 years) and Depot Theatre Board Chairman Steve Ives, the group consists of founding members Toby Shimin (Emmy-nominated documentary film editor); Jenny Evans (documentary and fiction film producer); Don Kleszy (documentary and short feature film editor); and Annette Solakoglu (film director and producer, currently co-executive producer of the new Jonathan Demme film) along with Peter Rundquist (composer, music producer and engineer whose work includes scores for leading documentaries) and newest committee member Ivy Meeropol, (documentary filmmaker) whose film Heir To An Execution was screened at DD during the second season. 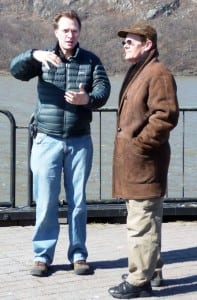 This group of film professionals holds both industry and personal connections (Ives, Shimin, Evans, Kleszy and Rundquist have worked in various combinations together; many have children of similar ages, and are linked in the commonplace six degrees of artistic separation, a regular occurrence in this area.)

The selection screening process for the films gestates in its own form of pre-production, as members, guided by films they themselves may have seen at festivals, or heard about from colleagues or general buzz, circulate DVDs, attend screenings, and hone a shortlist for consideration. Under-the radar films are not neglected either, with the committee sometimes eager to give a boost to one they admire but lacking in distribution. Sometimes films are obscure when DD picks them, but wind up garnering attention later.

With a majority vote of four needed for a film to be approved, there is a lengthy give-and-take period of sharing of ideas and opinions. If there is a strong no, they’ll debate it beyond the vote, largely via email. “So much thorough consideration goes into every film,” says Shimin. “There are at least four or five of us who watch every film completely and discuss it. It’s great to have a reason to articulate how you feel about a film. It’s an opportunity to delve into why you think it’s successful.”

“We are quite opinionated,” says Evans. “In fact Toby has to tame us because we spend so much time going back and forth, with long email threads and no decision. A film can be well-made but you can get a bee in your bonnet about something.” There are no set criteria for inclusion, but Shimin says a film needs to be “intellectually or artistically rich. If it’s too bleak it becomes too hopeless.” Which doesn’t rule out tougher films. “We had [the seminal 1974 documentary about the Vietnam war] Hearts and Minds,” says Evans, “but we balanced it with more upbeat films; we always think about the season as a whole.”

The first stirrings of Depot Docs began when Ives wished to hold a Garrison premiere – for his friends – of what was then his most recent film. He approached Claudio Marzollo, then chairman of Philipstown Recreation, regarding screening the film at the Depot Theatre. Marzollo made a projector and screen purchase, and asked Ives to come up with ideas for video and film programming at the Depot.

After conferring with Shimin, they decided that a “go with what you know” approach was best, especially as there were a few places in the region where independent features were screened, but there was nowhere one could go to see a documentary in a theater setting. “The paradigm emerged quickly,” says Evans. “Steve and Toby had great connections with documentary filmmakers and could get them to come.”

Meeropol was one of the early ones they “got to come.” She had recently moved to Cold Spring and “didn’t know anything about it until they screened my film. It was great, but a very different experience for me, especially with a personal film — usually I don’t ever have to see an audience member again! It was sort of my ‘coming out’ into the community,” she said. Ives is “particularly gratified to be able to include Ivy on our committee because she is not only an immensely talented filmmaker, but also a DD alumna, the co-creator of the Sunset Reading Series, and deeply connected to the local arts community. She is a wonderful new addition to our team.”

Over its seven seasons DD has gained a cachet among documentary filmmakers, largely due to the positive experiences that those invited have shared with colleagues. An integral part of the DD experience, for audience and filmmaker, is the Q-and-A session and the reception following each screening. Along with directors, guests have included producers, editors, composers, and once in a while, subjects themselves. “It’s become something special,” says Shimin. “People have heard of it, definitely. Within the documentary filmmaking community, DD has become an ‘ooh.’” The reasons: nearly all the screenings sell out, and the audience is enthusiastic, engaged and knowledgeable.

“We treat filmmakers the way we want to be treated. We’ve all been to these really sorry situations,” Shimin said. Meeropol added: “Yep, where it takes all day to get there and four people turn up and there’s an A/V system that doesn’t really work. This is a very professional organization.” 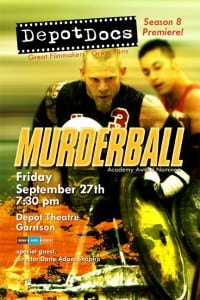 Nights of the screening are often very instructive for committee members who have chosen the films. Evans calls it “interesting to see how different it is to watching it on a DVD. There’s a revelation in seeing it with an audience.” That audience gets the benefit of an immediate, real-world dialogue with the filmmaker afterwards. “Hearing the back stories and learning how they got their shots makes it all so interesting,” says Shimin. “You don’t get that when you watch it on Netflix.”

This season, three of the films have been set. First up is Murderball (see description in separate article.)

Maidentrip will be the second film screened, in a premiere taking place before its theatrical release. The subject is Laura Dekker, the first and only teenage girl to sail around the world solo (she did it at 16 and 17, over a period of 17 months, extending from 2010 to 2012.)  Most of the footage was shot by Decker, with a camera mounted to the vessel. In attendance at the Nov. 22 screening will be (first-time) director, Jillian Schlesinger, and editor, Penelope Falk.

On Jan. 17, DD will show Detropia, which was released theatrically in 2012. Dealing with Detroit’s long economic down-spiral, resulting from the decline of the automobile industry, the focus is on the effects this has had on people and services there. Attending will be co-director Rachel Grady. “We chose to program it right now because of what has been going on in Detroit,” says Evans. “Also,” says Shimin, “it’s almost an experimental film, an art film, and it should be seen on a big screen, in a shared community.”

“We have a fantastic array of films in our program this year, touching on provocative, surprising and deeply emotional stories that I know will resonate with our always engaged Philipstown audience,” says Ives. The balance of the season will be announced at a later date.

For Once in My Life – guest: director, Jim Bigham