That’s how I see the act of serving baked French toast to overnight guests. Last weekend, friends from New York City came to visit us, and I woke up early to make breakfast. I wanted to indulge and impress them, and baked French toast (hereafter: BFT) is the kind of dish where people who normally say “you know, I really don’t go for carb-y breakfasts; I’m going to stick to the fat-free yogurt and fruit” come back for thirds once they’ve had a nibble.

I know. I’ve seen it happen.

BFT ingredients are just like those in regular French toast (except you substitute half and half – or even cream if you are truly evil – for the milk), but the structure of it is more like bread pudding: you tear the bread into pieces, toast them if they’re not quite stale, then pour the egg-cream mixture over it, pressing the bread into the liquid to make sure it’s completely saturated. 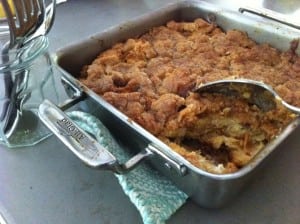 That’s it. Then you put it in the oven and 20 minutes later voila: breakfast. No standing over a griddle, flipping individual slices as they brown, then transferring them to a platter in the oven to stay warm (and get soggy). No dunking more sliced bread into the messy liquid for the next batch.

It’s easy, in other words. Unless you happen to be me. One thing I discovered about myself this summer is that I am someone who doesn’t feel comfortable with “easy.” I get anxious if things are going too smoothly. If I cut a step out of a recipe, I add two more. Which is why I top BFT with streusel, which really kicks it into overdrive, deliciousness-wise, turning it from a perfectly nice breakfast casserole into the kind of wildly delicious thing that makes kids rise from their seats and help themselves to seconds after taking a single bite, just to be safe. Their fathers soon follow.

In truth, streusel topping doesn’t have to be difficult. If you make one batch, you might as well make four and put some in the freezer, where it will be ready to top all kinds of things, from fruit crumbles (just add oats and spices) to muffins.

Anyway, just as BFT is semi-easy, it is also semi-cheap. Or it can be. I’ve made it with brioche and I’ve made it with very old hot dog and hamburger buns, and the latter was actually better than the former. Another camp cook even tried making it with leftover popovers, which sounded as if it should be amazing, but wasn’t. The old buns still ruled.

Which, come to think of it, perfectly suits our idea of French-toast history. We all “know” that FT was invented as a way for frugal French housewives to use up stale bread that they couldn’t afford to throw away because they were so poor. But if you think about it, milk and eggs have always been way pricier than stale bread. In other words, French toast has long been a food of the comfortable and well-to-do.

Larousse Gastronomique – which might be called the Bible of food reference books if the Bible were written by French snobs – actually calls it a dessert. It also provides a recipe that requires you to boil milk with a vanilla bean and superfine sugar, then cool it before you saturate your brioche slices in it. After that, you dip each slice in beaten, sweetened eggs, and fry them in a half-cup of butter.

A half-cup of butter? Zut alors! I thought I was being unscrupulous. Clearly, I have a lot to learn before our next houseguests arrive.

You can use a mixture of white and wheat breads, but avoid sourdough or savory varieties. What’s important is that the bread be quite dry, especially if it is lightweight – otherwise it will dissolve in the liquid.

You can easily double or triple this recipe, and keep the extra in the freezer. Add ¼ cup oats plus cinnamon, nutmeg, and ginger to make it a crumble topping, perfect for fall fruits.

Combine the sugar, flour, and salt in a small bowl. Cut the butter into the mixture using a pastry cutter or your fingers, until well combined (the mixture will be lumpy). Refrigerate or freeze until ready to use.