Law enforcement officials announced late Friday afternoon (Sept. 27) that extensive land-based searches near Cold Spring had failed to find murder suspect Sang Ho Kim and that they had concluded operations in Hudson Highlands State Park, although searches of the Hudson River, the homicide investigation itself, and an increased police presence in the local community continued.

In an outdoor news conference at the Cold Spring municipal parking lot, Putnam County Sheriff Donald Smith also said that the joint command, temporarily located at the village garage next to the parking lot, was being scaled back but not terminated, since inter-agency cooperation will go on.

Smith likewise said that Hudson Highlands State Park, scene of some of the most arduous searching, will be open for hiking as usual over the Sept. 28-29 weekend, albeit with a heftier police presence.

Smith was joined at the news conference by Nassau County Police Chief Steven Skrynecki, whose department is investigating the slaying of one man and serious wounding of another at a Long Island lighting company on Wednesday. Kim, a co-worker of the two men, is being sought in the incident.

“The ground, air, and water search has continued in Putnam County and so far we have not found Mr. Kim,” Smith said. “We’ve exhausted a lot of resources and we’ve taken it to the point we believe is productive. This afternoon we are wrapping up our search of Hudson Highlands State Park” while continuing water-oriented efforts. “If Mr. Kim is in the river, we certainly hope we find him. That search continues,” he said.

Overall, “this has been a very, very difficult search” and the inter-agency task force now seeks “to do the prudent thing” and pull back from the land-based search in order to concentrate on public safety, the sheriff said. “We have searched everywhere we could put people and not found a trace of Mr. Kim.” 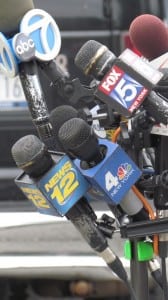 Major media from across the region attended the press briefing held next to The Riverview restaurant.
Photo by M. Turton

Accordingly, “we believe the best use of resources is to protect the people of Cold Spring, Nelsonville, and Philipstown. We’ve all signed up for that continued law enforcement presence in the area,” Smith explained.

He said the various agencies – his department, the New York State Police, Cold Spring police, New York State Park Police, and others – would use a variety of approaches to protect the public, among them attendance at community events, such as Haldane School District and Philipstown Recreation Department activities this weekend and when school resumes on Monday, both fixed and roving patrols, and – in the case of the MTA police – patrolling the Cold Spring train station platform.

“We have no reason to believe Mr. Kim is in the Cold Spring area. We’ve found no presence of him” but “want to err on the side of safety,” he said.

He described Hudson Highlands State Park as having “some of the most rugged terrain not only in Putnam County but in New York State” and said some areas they entered were not accessible by all-terrain vehicle or even on foot so searchers had to drop into the sites from the air.

Smith urged the public to keep their homes and cars locked and to report anything suspicious. He also pledged continued efforts to help Skrynecki and the Nassau police in their homicide investigation.

Skrynecki thanked the Putnam County Sheriff’s Department and the other law enforcement agencies that teamed up with his force and said the investigation goes on. “Everything is still open; all options are being considered. We’re acting under the possibility that he [Kim] is here and at the same time the possibility he’s not here,” he said. “The investigation will continue till he’s found.” The Nassau chief also asked the public to be vigilant and to remember that Kim is considered extremely dangerous. 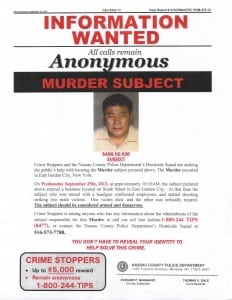 Cold Spring Mayor Ralph Falloon expressed appreciation for the diligence of the law enforcement  agencies. “The unified command center was going very well and I’m very, very impressed,” he said. Falloon also extended “a welcome to our beautiful village” to the members of the news media – at least 25  from across the region as well as New York City.

Both Smith and Skrynecki thanked journalists for helping to disseminate information about Kim and the case and asked for their continued cooperation. The news conference ended with the distribution of new posters for public display and information.

Although not at the news conference, New York State Sen. Terry Gipson commented as well. “As the search continues, it is important to follow law enforcement’s instructions and remain vigilant,” the senator said in a statement to Philipstown.info Friday evening. “My top concern is the safety of our community and law enforcement. My hand is extended in any way my office may be of assistance. My hopes are for a quick and safe conclusion.”

Rep. Sean Patrick Maloney also expressed concern. “My thoughts and prayers are with the victims of this senseless violence and their families and, like many Cold Spring families, I am hoping this murder investigation can be quickly brought to a close,” he said in a statement on Friday. He extended his thanks to the sheriff and other law enforcement personnel “working around the clock to keep our community safe.”