By Alison Rooney and Betty Monroe

Each summer, interested students from area public and private schools vie for one of five internships at local nonprofits, where they spend a minimum of 20 hours a week throughout the summer working on a variety of designated tasks, largely outdoors. The program is sponsored by the Philipstown Garden Club (PGC), with support from the Masonic Lodge #236 and the Putnam Highland Audubon Society.

This past summer, students — who must be entering their junior or senior year of high school or freshman year of college — from Haldane and O’Neill High Schools were placed at Constitution Marsh Audubon Center and Sanctuary; The Garrison Institute; Glynwood Farm; Manitoga; and Stonecrop Gardens. The process is competitive: the students must display an interest in horticulture and/or the environment, and submit an application and then undergo an interview with Garden Club members. Interns, who must write a report detailing their experience, receive a $1,000 stipend, the cost of which is split between the PGC and each nonprofit.

Betty Monroe, from the PGC, met with each student toward the end of their internship and reported the following: 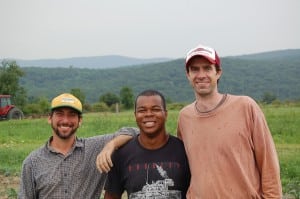 Yemajha Caraballo, a recent graduate of O’Neill High School, spent part of his summer working at Glynwood Farm. Glynwood, a non-profit, is dedicated to promoting locally grown food and sustainable agriculture. It has also maintained a commitment to the highest standards in humane animal husbandry. Glynwood’s mission is to improve the regional food system for the sake of human, animal and environmental health.

Yem’s responsibilities included the many necessary steps involved in agriculture such as weeding, transplanting, thinning, harvesting, and pruning in order to produce the vast array of produce at the farm. “I learned so much from my two supervisors, Dave Llewellyn and Jarrett Nelson, about proper plant care and treatment,” Yemajha said.

He also credits the many interns and apprentices working at the farm who were always more than happy to do additional work without complaint, and who were happy to impart their years of experience. He enjoyed their diversity and their common love for healthy organic farming, and the superior results it provides as opposed to store-bought produce. Parts of the experience he particularly enjoyed were pick-up days, when he got to meet people from surrounding counties who have a love for fresh produce and the benefit it provides for body and mind.

Russell Cox, a senior at Haldane High School, has been doing a lot of physical work this summer on the four miles of walking trails at Manitoga in Garrison. Manitoga, named after the Algonquin word for “place of great spirit” was the home of industrial designer Russel Wright. Today the home, studio and 75-acre woodland gardens express Wright’s ideas about creating design which works in harmony with nature. 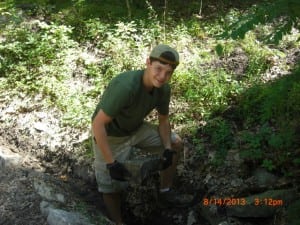 During July and August, Russell, under the supervision of landscape designer Emily Phillips, helped to maintain Manitoga’s grounds and general landscaping. The summer’s heavy rains did not make this an easy task. The heavy run-off eroded paths, clogged drainage ditches, knocked out sections of the natural landscaping, and brought down many heavy tree branches. Russell enjoyed the hard work afforded by this experience. He was also part of a team that worked at Manitoga’s day camp to create a new location for campers to congregate. This was done in an effort to allow the overused Mary’s Meadow, to reestablish itself. He recalls the highlight of his experience as the day he built a stage for the young campers in the pouring rain.

Haldane senior John Hughes, who is interested in environmental engineering, was selected to be the first PGC intern to participate in the program at The Garrison Institute. The Institute is the newest community member to join the internship program. Founded in 2003, it has been host to more than 40,000 participants at retreats and events held during the past 10 years. Forests and fields and contemplative gardens help to germinate ideas and practices conducive to personal growth and social change. 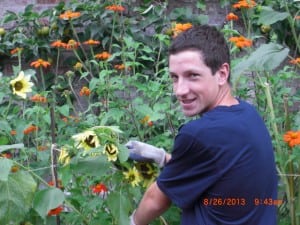 John was very complimentary of the staff and found everyone at the Institute to be friendly and outgoing. Under the direction of Paul Blasak, John was given various responsibilities caring for the center’s beautiful gardens and grounds. Weeding, watering, mulching and controlling invasive species were part of his daily routine. One of the most challenging, and the most fun for John, was clearing the large tracts of invasive bamboo found in various sections on the property. John’s favorite week at the Institute was getting ready for a scheduled outdoor event. The area where the affair was being held needed to be cleared, weeded, planted and mulched. “It was cool to see the transformation. It went from a very ugly area to a really nice flower bed.” 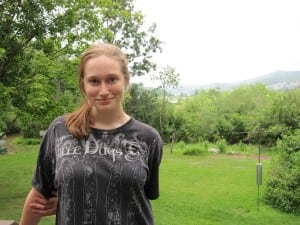 Recent Haldane graduate Ashley Cooper spent her final summer before starting college interning at Constitution Marsh. The Sanctuary, a 270-acre tidal marsh, is a New York State Bird Conservation Area and a Coastal Fish and Wildlife Habitat. The marsh provides refuge to the wildlife of the Hudson River Estuary and the group provides stewardship to the fragile wetland. Their goal is to give visitors a chance to observe river life and to gain insight into the conservation of the natural world.

Ashley was involved with setting up groups for the educational programs. She also acted, on occasion, as a tour guide. She was involved with marsh and stream studies, providing information about ecology and identifying various species. She also worked with other interns to control an invasive plant, phragmites, which is found in the marsh. By tarping the invasive reeds for a period of two years, heat will destroy the invasive species. Although a rather muddy endeavor, it was one of Ashley’s most enjoyable experiences.

Her most memorable day at the marsh was with a group of teachers from Westchester. They used a telescope and located a Bald Eagle’s nest. They were able to observe the bird in its natural environment, a truly wonderful experience. 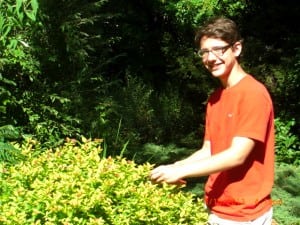 One beautiful sunny day and a chance meeting brought a realization to Philipstown Garden Club’s intern, Kieran Austin. As he was going about his daily assignment, a mom walking by with her young daughter commented, “You’re really lucky to work here.” It became his most memorable moment, as it made him aware that working at Stonecrop seemed more like a vacation spot than a work destination. Stonecrop’s gardens cover an area of approximately 12 acres and comprise a diverse collection of plants found in woodland and water gardens, a grass garden, raised alpine stone beds, cliff rock gardens, and an enclosed English-style flower garden. The entry to Stonecrop is highlighted by a glass conservatory at the edge of a water lily pond. Walking the winding pathways leads visitors through what seems like a storybook wonderland.

Kieran, a senior at Haldane, is interested in biology. He was first introduced to Stonecrop by his parents when he was a boy. Through his experience at Stonecrop, he learned that “horticulture is a lot less precise than he thought … it is kind of taking nature as it is.” Under the guidance of Stonecrop’s Emily Detrick, he learned how to prune, start plants from seeds, transplant seedlings, and properly mulch, water and dead-head various plant species. Kieran found transplanting and pruning to be a relaxing task which provided the most enjoyment because it allowed him to see the direct impact his actions had on the plants.