Michael Liguori, newly appointed attorney for the Village of Cold Spring, made his first appearance at a Village Board meeting on Sept. 24 (Tuesday), meeting with trustees in a one-hour “get acquainted” executive session prior to the start of the regular public meeting. Liguori recently replaced Stephen Gaba.

The regular meeting lasted little more than an hour and also served as a public hearing for proposed changes to the village zoning code regarding the publishing of legal notices for hearings held by the Zoning Board of Approvals (ZBA). Other business included continuing discussion of the Request for Proposals for sale and development of The Grove property and correspondence concerning a New York State program to acquire properties, and in some cases demolish buildings, in areas that experienced serious damage as a result of severe storms in recent years.

Currently, the ZBA is required to advertise its public hearings at least 10 days prior to the hearing date by placing a legal notice in the official newspaper, which for Cold Spring is the PCNR. Tuesday’s public hearing heard comments regarding a proposed change to the village code, which will reduce the required notification period to five days.

ZBA member Marie Early explained that under the present law, applicants for a variance or special permit can experience long delays due to the timing of ZBA meetings and the PCNR’s publication dates. She said that in a worst-case scenario, applicants have to wait as much as 21 days after the ZBA has given its approval before undertaking a proposed project. Early said that the proposed change would reduce applicants’ wait time up to a week.

But Cold Spring resident Sue Peehl asked, “Why now?” in speaking against the proposed change. “Notice of Public Hearings is critical to the public,” she said. Peehl said that while a shorter notification period may be a plus for applicants, “Speeding up the process may not be of benefit to neighbors.” She cited summer vacations as a reason for maintaining the status quo, stating that for people who are away for a week, the 10-day notification period gives affected residents more of an opportunity to comment on proposals.

ZBA Chair Donald McDonald said that there is nothing “nefarious” about the board’s intent; that it is simply trying to speed up the process while also looking into other ways of notifying the public. He said that in Yorktown, signs are placed on subject properties. “It’s a great way to let people know,” he said. Peehl didn’t agree, commenting that such signs may not be effective, depending on where they are placed on a property.

McDonald said that in the past, mailed notices have gone only to adjoining property owners but that the ZBA is considering giving notice to all properties within 100 feet of any part of the subject property, a move that he said would result in better notification. Early added that the ZBA is also considering using USPS Priority Mail for notifying nearby residents, a system that does not require the recipient’s signature but confirms delivery and can be tracked online. Asked by Trustee Matt Francisco if that constitutes legal notice, Liguori said that he would look into the matter. Liguori also noted that state law only requires five-day notice.

Correspondence was received from Barney Molloy, Chair of the Cold Spring Planning Board, stating that the Planning Board has no formal objection to the proposed change from 10 to five-day notice, but that the board is concerned that different notice requirements for various Cold Spring boards can cause confusion. He said that Planning Board members had unanimously agreed that a meeting of all Village Boards should be held to discuss the potential for making notifications more uniform.

The public hearing was closed when no one other than Peehl offered comments. Trustees will consider the proposed change at its next meeting.

The Village Board is two-thirds of the way there in approving the Request for Proposals (RFP) for sale and redevelopment of The Grove. A unanimous resolution was passed approving the RFP with the exception of a final clause regarding publication in the official newspaper and on the village website and advertising beyond the village. Carolyn Bachan, a member of the Historic District Review Board, said that based on her research, the RFP could be advertised in The New York Times for roughly $500. 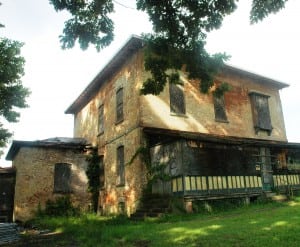 The problem is there is no budget to do so. Mayor Ralph Falloon said that village administration will be consulted regarding how to fund the advertising. “I don’t know that we have any choice but to advertise,” he said. Francisco agreed, saying “The only opportunity for a financial return is to advertise.” Bachan added that once the property is sold, advertising costs will be recouped through taxes.

The Grove is located across from Drug World on Chestnut Street. Designed by noted architect Richard Upjohn and built in the 1850s, it is listed on the New York State and National Register of Historic Places. It was acquired by the Village of Cold Spring in 2003.

The Village Board received notice regarding a New York State program to fund acquisition, and in some cases demolition, of buildings and property located in 100-year floodplains. The program could, in theory, affect properties on and near the riverfront in Cold Spring. The first phase of “Recreate New York” has funding of $1.7 billion.

The memo states: “A significant portion of the … allocation will be used for the buy-out and acquisition of some of the worst damaged properties.” It also states that no specific buy-out areas have been identified. The project, “aims to preserve our natural floodplains, prevent future damage to homes and businesses … and assist those impacted by Hurricane Sandy, Hurricane Irene and Tropical Storm Lee.” In Putnam County, 13,800 acres have been designated as floodplain.

Related correspondence sent to all organizations of interest, part of standard procedure, was a notice from ProSource Technologies regarding its designation as lead agency in the SEQRA process for the floodplain buy-out program. Not surprisingly, trustees showed no interest in having the Village of Cold Spring play that role.