Photographer Cali Gorevic says the 14 images she has featured in a new Gallery 66 NY joint exhibition, A-Line-Ment, which she is sharing with Jaanika Peerna, have as much to do with circumstance as anything else. Gorevic, long known for her gelatin silver prints, many of trees and ice-filled landscapes, has come late to digital photography. Though she initially had many reservations, what she has found is that shooting digitally has made her see differently. “When I was working in a darkroom,” she reflects, “I always said I was sculpting with light. When that went away, I became more aware of other lines because I was no longer having a three-dimensional experience.” The theme of A-Line-Ment is the inter-connectivity of light and line. 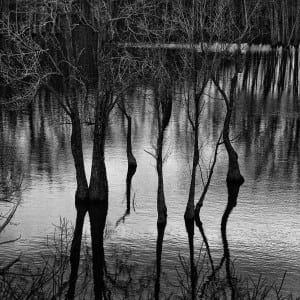 Gorevic came to digital through necessity: she wasn’t able to create the type of effects she wanted in a series of images entitled Toys, in which she superimposed a real toy onto a fantastical background, dramatizing imagination: “I love the idea of a kid sailing his boat in a bathtub but imagining him/her/self upon the high seas … I started photographing them – indoors, outdoors, in combinations – nothing seemed right until eventually I recognized what I was looking for. Imagination just floors me. We can imagine anything.”

A digital learning curve followed, and Gorevic dubs herself a hard worker. “I work just as hard on digital as I do on film. If you want it really good, you have to work at it. I make a work print, then find a zillion things wrong with it, then make another work print. The ease in digital is in printing it.”

She started out simply using an iPhone, because “it was easy, it was there,” then decided to get, “a real camera. I’m not a techie person, I simply ordered it [a Canon 5D Mark II] online, just looking for what would give me good resolution, since I was so spoiled.” She’ll admit to ease in not having to lug around her large Hasselblad camera, which at times was cumbersome. “No light meter either, or the filters and the other paraphernalia — it makes it easier,” she says. “And digital offers many wonderful opportunities, including compositing.” But it’s not an all-digital world for Gorevic. “It depends on the circumstances.” 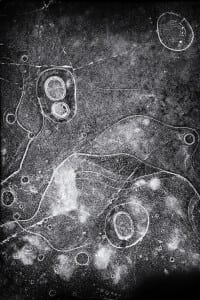 Gorevic believes “you cannot photograph what you don’t love,” which in her case has led her lately toward extremes: “I am partial to extremes: meltingly hot swamps and frigid, icy conditions,” and now animals: cows, wolves (in preserves), along with her staples: rocks, water, ice and wood. She describes her affinity for ‘living things’ on her website: “Objects may seem unimportant and without artistic value, but each has its own landscape, with its own energy, poetry and mystery. I find these spheres, feathers and stones, their forms and textures, very compelling. Their attributes and expressions shift whether on their own or in combinations where they can relate to one another.”

Gorevic doesn’t necessarily start out with the intention of creating, say a “rock series.” Rather she photographs what she comes across, and eventually a collection emerges. “I always have subjects,” she said. “I have books and books of negatives, now file after file. I take pictures of stones, rocks, and house wrecks, clouds, real weather — I have an obsession with telephone poles — electric lines. When I have enough cohesion, there’s a show.”

Shooting some of these digitally has brought out new perceptions within the photographer. All of these elements she sees as drawn together “with lines, abstract and representational. It’s always fascinating to line up a group of photographers: all see something different. My favorite thing as a photographer is making order out of chaos, to look at a scene and find an essence. With digital, I see the lines, the movement. With [her non-digital] Trees people commented that it looked like things were going to happen. But not these, they’re about movement.” 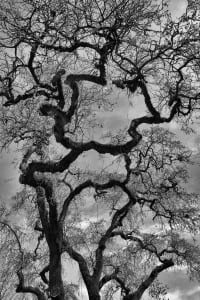 Gorevic, who also sculpts, wrote: “I major in trees and still life, with a minor in architecture. Trees are the most fun – making order out of chaos, but still life photography allows for the highest degree of control. Subject choice, composition, angle and lighting totally change the feeling and the message of the image … The challenge with still life is to avoid the conventional and to convey your own unique perceptions … I also sculpt in water-based clay and cast in bronze. Whatever medium I am using, the essence of my work is mystery and magic.”

Usually photographing locally, Gorevic moved here from Manhattan about 13 years ago, having looked all over, “Connecticut, Western New Jersey, nothing felt right until we came here. A lot of that was due to Garrison Art Center — things were so accessible and you could jump right in. I fell in love instantly; plus if you throw a stone you hit an artist so there is constant stimulation.”

Art, in all its varied iterations, is about light and line. During the month of October, Gallery 66 NY will explore their interconnectivity.