The federal government shutdown pitting the White House against Congressional Republicans tore into the mid-Hudson Valley early this week with hundreds of area federal employees, including those working for West Point and Rep. Sean Patrick Maloney, furloughed without pay, though the congressman’s offices remain open. 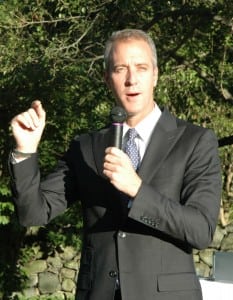 As the crisis continued after the failure of the U.S. Congress to adopt spending legislation and the Democratic-controlled Senate and White House clashed with the Republican-led House of Representatives, more than 800,000 federal workers nationwide found themselves on unwanted, unpaid leave. According to Maloney, they include his staff members, as well as employees of Stewart Air National Guard Base, plus civilians at West Point.

“The U.S. Military Academy conducted an orderly shutdown Oct. 1, as it released non-exempted civilian employees in response to the lapse in appropriations to fund the government,” West Point announced in a news release, as the shutdown began. The academy faculty consists of approximately 70 percent military personnel. However, civilians are also employed in other capacities at West Point.

“West Point’s leadership will continue to be your biggest advocates,” Lt. Gen. Robert Caslen, superintendent, told the academy workforce during a meeting. “You are an essential part of our mission and we realize that without you the ability to accomplish our mission is substantially hindered.”

During the closure, West Point “will continue to accomplish its mission,” the academy stated. “The primary focus remains in minimizing impact to all classroom instruction and military training while preserving sustainment and safety of the Corps of Cadets. All operations involving security [including] maintaining sufficient police, fire, and emergency medical protection for the military and family members living on West Point will continue.”

Academy officials noted that “the current situation is very fluid and many details are unresolved” and that such things as “academic travel and sporting competitions can still be at risk but are being assessed by our chain of command and Department of the Army.” Activities at West Point are funded by appropriated funds, non-appropriated funds, and private donations or a combination of all three.

Rep. Maloney said that despite the furloughs his Washington and Newburgh offices remain open with his staff available to assist constituents from the Hudson Valley with any problems with federal government agencies, including the Social Security Administration, Centers for Medicare and Medicaid Services, or the Veterans Administration. Maloney voted to avert a shutdown, but also voted to ensure that members of Congress and their staff receive no federal contributions to cover their health-care costs under the Affordable Health Care Act, otherwise known as Obamacare.

The new health program covers Congress as well as ordinary citizens. “Families and businesses in the Hudson Valley are not getting special subsidies from Obamacare and neither should members of Congress or the White House,” Maloney said. He encouraged constituents with questions to visit seanmaloney.com to transmit email or call his office at 202-225-5441 or 845-561-1259.