When looking for a day trip to get away – but not so far that the drive home overcomes the relaxation that the destination provides – look no further than Montgomery Place, a 300-acre gem located on the Hudson River, just south of Tivoli. It’s 43 miles north of Cold Spring via Route 9, or better yet, take the Taconic State Parkway, which adds 12 miles to your trip but only three minutes driving time. It’s a pleasant fall drive – minus the stress and urban sprawl that Route 9 rarely fails to deliver.

The mansion is the centerpiece of Montgomery Place.

A bit of history

A simple but effective visitor center tells the story of the estate, whose lands have been shaped and reshaped over time after being purchased by Janet Livingston Montgomery in 1802. Her husband, Gen. Richard Montgomery, was killed in 1775, leading the American assault on Quebec, during the Revolutionary War. Fort Montgomery, Montgomery, N.Y., and Montgomery, Ala., are just three of many places across the U.S. named after him.

It takes six people to hug a locust tree at Montgomery Place.

The mansion, built in 1804-05, is the focal point of the estate, enhanced by expansive lawns that introduce it. Optional mansion tours are available at a cost of $10. One major feature of a redesign completed in 1860 was the addition of the beautiful north pavilion – a spacious, furnished porch that today provides visitors with a comfortable place to sit and take in views of the Hudson River below and to the west. Just off the pavilion, enormous locust trees, likely planted in the early 1840s, are worth a close-up look. They’re impossible to miss.

Livingston Montgomery established a commercial nursery for fruit trees and other plants on the site – even before building her house. Today, the estate still boasts extensive commercial orchards.

The site offers three short but interesting trails and sturdy shoes are a good idea. The Sawkill Trail is probably the best, dropping 80 feet through a wooded ravine to the striking Sawkill Creek waterfall. Early in the 20th century it was used to produce hydroelectric power. The West Lawn trail is an easy walk and passes by a pond that frog lovers will appreciate. The South Woods Trail runs west from the visitor center, through the forest, and down to the Hudson River.

The pond on the West Lawn Trail

For day-trippers not interested in joining the crowd, Montgomery Place is indeed the place. In two visits there during the past six weeks, this reporter found “peace and quiet” at the property.

How many apple varieties can you name?

Just around the corner from the estate, on Route 9G, you’ll find Montgomery Place Orchards’ historic roadside stand. Originally known as “The Wayside Stand,” it was established in the 1930s by Violetta Delafield, then owner of the estate.

Doug and Talea Fincke have managed the operation for the past 27 years. They follow a long line of tenants dating back to the 1700s, using the same lands that Livingston Montgomery purchased at the start of the 19th century. It is no ordinary apple orchard. Montgomery Place produces nearly 70 varieties of apples, many of them heirloom. And you get to sample before you buy.

The stand, which includes part of the original building, also features a wide range of other seasonal fruits and many “spray-free” vegetables along with jams and vinegars made from Montgomery Place produce. Talea Fincke told The Paper that production of Annandale Atomic Hard Cider was halted this year due to recent changes in New York State laws, but that the popular alcoholic beverage will return next year. The Fenckes supplement their own offerings with produce from other local farms. Visit the website at mporchards.com. 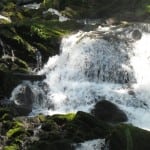 The grounds of Montgomery Place are open January through December. House tours run early May through late October and year-round with group reservations. For GPS or MapQuest, use 25 Gardener Way, Red Hook, NY 12571.