In a meeting Wednesday night at the county-owned Putnam Golf Course, Odell presented the draft budget to the Putnam County Legislature, whose members promised to go through the draft carefully. The draft budget appeared online on the official county website Thursday (Oct. 3). 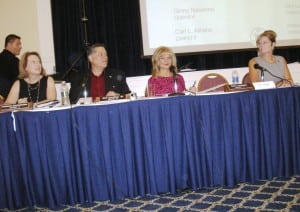 Putnam County Executive MaryEllen Odell, far right, presented her draft 2014 budget to members of the county Legislature, including, from left, Barbara Scuccimarra, Sam Oliverio, and Ginny Nacerino, as a technician worked in the background. Photo by L.S. Armstrong

Odell said Wednesday that her vision is “to provide a transparent, effective and honest government dedicated to meeting the needs of its citizens” and that she had sought to “develop a fiscally responsible budget that provides for the health, safety and quality of life of our residents while not exceeding the tax-cap limit of 1.66 percent.” She added that “this administration strongly supports the tax cap.” She noted that when the state government imposed limits on tax increases a few years ago, the cap was expected to be 2 percent. “They lied,” she said. The cap is linked to inflation, currently pegged at 1.66 percent.

A public hearing followed Odell’s presentation, although it was not clear how citizens could be expected to comment on a budget draft not yet available to the public. However, a legislative staff member told Philipstown.info that a follow-up public hearing would likely be held.

Odell said the 2014 budget reflects increases of $925,000 in obligatory state pension costs, $922,000 due to step and longevity increases and negotiations, $243,000 for state-required worker compensation, , and $150,000 to PARC, the organization that assists the developmentally disabled and runs a pre-school that almost shut this summer before the county helped rescue it. 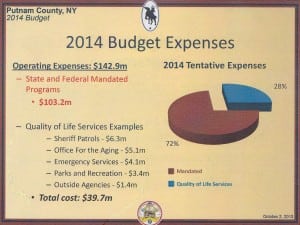 A chart from the draft budget presentation shows the breakdown of mandates versus other expenses. Graphic courtesy of the Putnam County Legislature and Barbara Scuccimarra

The county executive blamed much of the overall county spending on unfunded mandates, projects imposed by state and federal governments with little or no financial support to offset the expenses. She said that 72 percent of the 2014 budget will go to mandates, including Medicaid – “the single-largest line item in the county budget” – while quality-of-life services will take up 28 percent and cover everything from Putnam County Sheriff’s Department patrols to the Office for the Aging to parks and recreation and aid to outside agencies, such as local libraries and museums and the animal humane society.

According to Odell, “there are more than 200 state and federal mandated programs. They consume the entire amount of Putnam County sales tax dollars and the entire property-tax levy. We continue to ask Albany to deliver on their promise of mandate relief.”

Odell’s budget anticipates raising $52.5 million in sales tax in 2014, a projected increase of $1.4 million. In comparison, county property tax is expected to bring in $39.2 million.

County sales tax practices have been a frequent sore point locally. Businesses like those on Main Street in Cold Spring must collect sales tax but Putnam County, unlike numerous others, does not return a portion to assist local governments and ease local property taxes or cope with the demands of tourism. Sales tax helps minimize county (as opposed to town or village) property taxes, Odell said.

Other revenue highlights she mentioned included getting 10 times more for a Medicaid-related transportation program, a change she attributed to efforts of Vincent Tamagna, county transportation manager. Instead of $3.25 per ride, the county now gets $37.33, which means that compared to $800 in monthly reimbursement for July 2012, for July 2013 the county got $8,000, Odell explained.

Her budget would increase aid to libraries by 2.5 percent, or $10,000 county-wide, because “there are increased requirements placed on our libraries as unemployment levels remain high” and economic uncertainty persists. The draft also provides an increase of $10,000 for tourism event transportation.

One of only three members of the audience to speak at the public hearing, Carol Donick, director of the Desmond-Fish Library in Garrison, thanked Odell for the extra money for libraries. “It is very much appreciated and I promise we’ll put it to good use,” she said.

District 1 Legislator Barbara Scuccimarra, who represents Philipstown and part of Putnam Valley, congratulated Odell for “a wonderful presentation” and said she looks forward to implementing the vision it embodies.

Sam Oliverio, of District 2, based in Putnam Valley, said the initial look at the budget “bodes well. That 1.6 rate is outstanding, at first glance.”

Legislator Dini LoBue likewise thanked Odell “for a very clear presentation. Tonight was a little bit of a show and preview” and serious scrutiny of the draft will occur during the legislative committee meetings, she said. “And there will be debates.”

“The games will begin in two days,” with the first committee discussions, Legislature Chairman Richard Othmer predicted, as the session adjourned.