After 27 years, artistic director has his exit 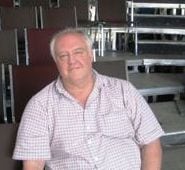 O’Brien said, “It has become clear to me that for HVSF to move into the next stage of its growth, the Festival will need someone at the helm who is not only a talented artistic leader but can also make a substantial commitment to its fund development and long-range financial planning activities.

“My passion is for directing and helping to evolve the work of actors and directors. And, while I love doing Shakespeare plays and am proud of what I’ve accomplished at HVSF, I think it’s important that I also explore material that falls outside the scope of what we’ve traditionally presented.”

Arditi said that the organization was sorry to learn of O’Brien’s decision. “Terry is an inspired director and creative genius, who has established a strong artistic tradition of presenting Shakespeare and other classics in a free-wheeling, clear, accessible, and distinctly American style. He has also been a great mentor to the actors and rest of the creative team, including the many apprentices he has attracted to the Festival. Terry’s unique American approach to Shakespeare and theater in general will be a lasting legacy, one that the Festival’s company will strive to nurture and build upon. He will retain the title of Founding Artistic Director.”

O’Brien has been Artistic Director since he co-founded the Festival with actress Melissa Stern in 1987. “It began on the open fields of Manitoga in Garrison,” O’Brien said.

“Since that time the Festival has become a nationally-recognized regional theater, presenting three full plays in repertory each summer season on the beautiful grounds of Boscobel Restoration in Garrison. I have been very fortunate to direct on such a magnificent stage with such an abundance of generous artists and to have had the support of our very generous donors and our faithful and enthusiastic audience for so many years.”

As a director, O’Brien has consistently garnered high praise for his artful and innovative staging of Shakespeare’s plays.

In a letter shared with friends and colleagues, O’Brien wrote: “I’ve worked with most of you in some capacity at HVSF, some of you perhaps more closely than others, and many of you on several productions. I’m deeply grateful to have had the chance to spend time working with you and I wanted you to know how much I value those collaborations.”

O’Brien continued: “This is a significant transition for me, but I’m looking forward to whatever may be around the next corner, and to expanding the range of my work. I’ll continue to support HVSF’s work, and I look forward to seeing you up there.”

The theater tent at Boscobel

Arditi expressed gratitude for O’Brien’s many years of artistic leadership.

“Thanks to his tireless efforts, the Festival has steadily grown from a grassroots, informal outdoor theater into a critically acclaimed, nationally recognized regional theater, attracting 35,000 audience members each summer season and maintaining a ‘fill-rate’ of 83 percent, much higher than the national average,” she said.

“In addition, our year-round education programs have grown in number and diversity, serving 40,000 students and faculty in the tri-state area. Under Terry’s stewardship, the Festival has played to nearly a half-million theatergoers. The Festival now has an annual operating budget of nearly $3 million and employs more than 170 people over the course of the year. None of this growth would have been possible without Terry’s exceptional imagination, determination, and restless pursuit of excellence.”

The Festival’s Board of Directors will form a search committee for a full-time artistic director to lead the company forward.

O’Brien is staying on as Artistic Director through the end of this year to give the Festival time to start the search process. He will remain the director for the Festival’s holiday offerings this fall and winter: An Evening with Edgar Allan Poe, featuring Jason O’Connell, and O’Brien’s singular adaptation of Charles Dickens’s A Christmas Carol.