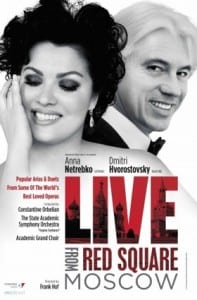 As part of this programming, the Downing Film Center will feature Live at Red Square at 1:30 p.m. on Sunday, Oct. 13. Tickets are $10/general admission, $8/Downing members. Tickets can be purchased at the box office or at downingfilmcenter.com. Call 845-561-3686 or visit the website.

Live at Red Square provides a chance to witness two of Russia’s greatest singers performing in their homeland. Anna Netrebko is one of the world’s most highly regarded opera singers. Acclaimed baritone Dmitri Hvorostovsky appears regularly on the world’s greatest stages. Appearing for the first time together in Red Square, Netrebko and Hvorostovsky will perform for one night only in front of an audience of 7,500 people. The program will include popular arias and duets from some of the world’s best-loved operas, including Tosca, Eugene Onegin, and Il Trovatore.