Presentation focuses on life cycles, habitat and way of life

Heitmuller speaks to the group.

Heitmuller began by asking the audience if anyone had spotted a coyote. Many hands went up, but despite this he said that it’s “not always easy to see them, because they don’t want to be seen,” though they leave evidence, in the form of scat and tracks, all over. If you’re not sure whether you’ve seen a wolf or a coyote locally, it’s an Eastern Coyote, as there are no longer any wolves in New York state. They used to be prevalent throughout the Northeast but they were “extirpated” — trapped and hunted relentlessly, beginning with European settlement. Coyotes, on the other hand, are found throughout North America.

Originally they were located solely in the prairies and desert of the Western U.S., but they have migrated throughout the continent. Those found in the west are smaller, with an average weight of just 20 pounds, while the average weight of those in the east is closer to 35 pounds (the range is 30 to 45 pounds) because of cross-breeding which occurred when coyotes from the midwest came east and cross-bred with wolves.

Heitmuller described the identifying physiology of the coyote as long skinny legs with compact feet, pointy nose, yellow eyes, very large ears with white fur inside — the fur is needed for warming purposes in winter, and hackles, the loose, muscle-filled skinfold located above the upper spine which sticks up most of the time. He said if you watch the hackles when a coyote is in motion it always moves, bouncing back and forth.

Heitmuller pointed out these features on a taxidermy construction of a coyote. The tail of a coyote is always down when walking, but when it runs, it is extended out for balance. Coyotes come in a variety of colors, including tan, brown, white and black and mixes of all of these. Heitmuller displayed and circulated two large pelts. 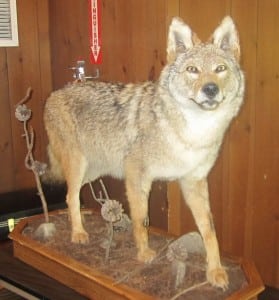 A coyote taxidermy, brought along to illustrate the description.

When coyotes are two years old they select a mate, whom they mate with for life. February is breeding season in New York, with the pups born, after a 60- to 63-day gestation, in April or early May. Litters range from 2 to 12, with an average of 6, all dependent on overall surrounding food sources.

“If there are plenty of deer or turkey, the numbers go up,” Heitmuller said. Mother coyotes dig out den sites, often more than one, used for whelping and raising their young. Pups, as they are called, are born blind, toothless and helpless, with fine brown fur. Their eyes open at 10 days, their teeth come in at 12 days, and their mothers feed them milk for a month before they experience their first solid foods, in the form of a mouse, first chewed up, then regurgitated, by their mothers.

At six weeks they are brought whole food: mice, rats and other small rodents like voles. During the summer months, they learn to hunt, alongside their parents. The young disperse from their family unit in November or December.

Eighty percent of a coyote’s diet is small rodents. They are also able to kill rabbits, woodchucks, geese, fawns, and occasionally a deer, though their main deer ingestion comes from carrion and not live kills. They also consume apples, snakes, grasshoppers, frogs, eggs and acorns. Addressing a concern from an audience member, Heitmuller explained that yes, coyotes do eat cats and small dogs, and he urged people to keep their small dogs leashed and/or indoors if they are aware of a coyote nearby.

He also described scenarios in which one household fed a coyote, thus leading the coyote to repeatedly visit that area, and heading into nearby yards to forage for more, leading to the unfortunate consumption of domestic pets left outside. “Don’t feed them,” he emphasized, adding that coyote population numbers “are pretty good right now.” According to the New York Department of Environmental Conservation the coyote population in New York during the summer is approximately 20,000-30,000. 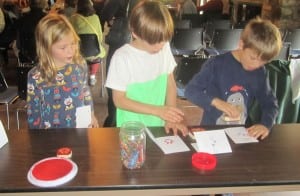 Reminding the audience that wild animals cannot truly be domesticated, he mentioned several species, including raccoons, groundhogs and even deer which can adjust well to living with humans when young, but which turn aggressive when mature, especially during breeding season. To avoid attracting coyotes, Heitmuller suggested controlling sources of food, thinning brushy areas, providing secure shelter for chickens, rabbits, etc. and eliminating coyote-accessible crawlspaces, as they do congregate under buildings, nesting and raising young.

Coyotes are communicative animals.  In fact, they have, according to Heitmuller, “at least 11 different vocalizations: growls, yips, howls and barks” depending on the situation. They use excited yips and howls to call each other and “each female has a ‘kids, get back here’ sound which her young know means them,” he added. He played audio of coyote sounds, contrasting them with those of wolves, who harmonize together more; the difference was quite evident. Other coyote modes of communication are facial expression, body posture, and the marking of territory with urine.

With a range of up to 20 square miles, coyotes can cover 10 square miles easily in a day. Their tracks form a straight line, as opposed to the more meandering paths of dogs. Heitmuller displayed a drawing showing the differences between tracking impressions of dogs, coyotes and foxes, and concluded the presentation with an invitation to the children in the audience to adjourn to a table to make track ID cards.

The next presentation takes place at 2 p.m. on Sunday, Oct. 13, at Hubbard Lodge, when HHNM environmental educator Lisa Mechaley presents a program on Woolly Bear caterpillars. The talk will include a hike in search of Woolly Bears and a craft activity for children. The last program, at 2 p.m. on Sunday, Nov. 17, brings Heitmuller back to talk about turkeys — their natural history and adaptations. It will also include a guided hike, searching for signs of the birds.

Admission for all programs is $7 for adults, $5 for children, with reduced costs for HHNM members. Visit hhnaturemuseum.org or call 845-534-5506, ext. 204. Admission fees help care for the museum’s animals at the Wildlife Education Center in Cornwall.