Break-ins reported in Garrison and Nelsonville

The Garrison Art Center (GAC) became the latest victim in a series of recent burglaries in Philipstown when someone broke into the offices of the organization located at Garrison’s Landing, bringing the number of recent local burglaries to a total of six in the past six weeks.

GAC Executive Director Carinda Swann told The Paper that staff arrived at work at 10 a.m. on (Thursday) Oct. 10, to find part of the main office in disarray. She said that a burglar or burglars had broken in through a window, forced open a locked file cabinet and stolen a small amount of cash. The burglars apparently also attempted to get into Swann’s locked office using keys from the main office but were unsuccessful. She declined to say how much money was stolen but said, “We don’t keep a lot of cash here.”

Investigators from the Putnam County Sheriff’s Department arrived later that morning, interviewed staff and took fingerprints. There was no damage done to any artwork, computers or other items inside the art center. 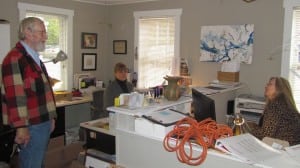 Dolores Strebel, Programs and Events Manager at GAC, center, said the burglary there
was a “violation” and “very personal.”
Photo by M.Turton

Dolores Strebel, Programs and Events Manager at GAC, was upset by the robbery. The intruders trashed her desk, file cabinets, and work area. “It’s a violation. This is like my home,” she said. “It’s very personal.”

Four weeks ago, the convenience store at the Gulf station on Route 9D in Garrison just north of Garrison Union Free School was also the site of a break-in by thieves. A spokesman there who asked not to be named said that an undisclosed amount of cash and cigarettes were stolen. That robbery occurred overnight and the thieves broke a window to get inside the store.

About three weeks ago, both apartments in a duplex at Garrison’s Landing were also burglarized. Neighbors there said that jewelry and cash were taken. The same day, a home on Lower Station Road was also burglarized.

The home of John and Carol Merante in Nelsonville was broken into a little more than two weeks ago. Once again, jewelry and cash were taken. Their son, Zach Merante, said that the robbery took place at mid-day and that the burglars had ripped out a screen to gain entry. “It’s the last thing you expect to happen in the middle of the day,” he said.

“Most of the burglaries occurred during the daytime and in most of the cases entry was gained by forcing in a door of the premises,” Putnam County Sheriff Donald Smith said in an email to The Paper. “Investigators urge anyone who has information about the burglaries or who observes any unusual activity in the area to call the sheriff’s office at 845-225-4300, or to call 911 to report a crime in progress. All calls will be treated confidentially.” In light of the burglaries, the Putnam County Sheriff’s Department has increased patrols in the area.

About two million homes are burglarized each year in the U.S. Homeowners – and businesses – can improve security by following basic tips offered on numerous websites. One is protectyourhome.com. Once on the site, key in how-to-prevent-burglary.