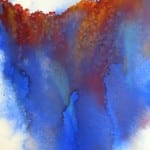 A Meditation on Elegance

Beacon artist and layout editor for The Paper Kate Vikstrom is showing a selection of watercolors and collages as part of an international group show at New Century Artists Gallery in the Chelsea district, New York City. In a review in Gallery & Studio, J. Sanders Eaton wrote: “Vikstrom’s pictures possess an intimate charm akin to the small gems of Paul Klee.”

Vikstrom moved to Beacon in 2012 after living many years in the Pacific Northwest – primarily in the rainforest of Southeast Alaska, and for several years on the Puget Sound in Washington state.

Her style was influenced by the Impressionists, who were intent on conveying an “impression” or feeling of recognition of a location as opposed to its exact details. Several years ago she lived for three months in Paris, where she explored their works first-hand. Her artistic sense is also defined to a great extent by living in close connection with great bodies of water. 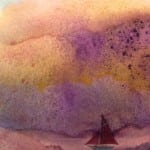 Day of Gold and the Sloop Woody Guthrie

“There is one specific place I am always attempting to show you – the place where water and sky seem to have no hard edges; where earth, water and air intermingle. The mists that move within that space allow the painting to evoke emotion and touch upon the mystical. For me this is a metaphor for all of life, in which there are no clear boundaries between friend and stranger, spiritual and physical, love and poetry.”