Thirty minutes or less. Five ingredients or fewer. No more than four steps.

These are the gold standards for recipes, embraced by most mass-market cooking publications for the last 10 years. I understand why. A short recipe looks good on the page: neat, compact, manageable. It appeals to readers. It’s attractive.

But to meet this ideal, recipe developers often cut important ingredients or leave out valuable steps. And their efforts don’t necessarily even pay off – as evidenced by a friend’s recent post on Facebook: “Why does every ‘30-minute’ recipe I make take an hour and a half?” 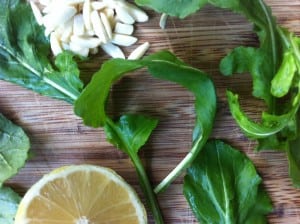 I know why. Because cooking takes time. It simply does. Think of it: You can spend 10 minutes simply finding, assembling, and measuring your ingredients. And if you have to wash and chop vegetables, slice meat, shred cheese, or crush nuts, you can easily add another 20, depending on how sharp your knife, how quick your wrist, and how numerous your prep tasks.

And that’s before you even turn on the stove.

But what about those nights when you have no time – none? When you walk in the door 10 minutes after you should have eaten without a clue what to make? On such nights, my family can sometimes be found sitting down to a baking sheet piled high with tortilla chips topped with refried beans and melted cheese. Yes: Nachos. And not even very good ones.

Including sour cream and salsa, the meal tops out at five ingredients.

Lame Nachos, as I call them, are one of a handful of dishes I turn to on such nights. Others include pasta with tomato sauce, pasta with bacon and eggs (aka carbonara), pasta with broccoli and garlic, and pasta with pesto.

You may notice a theme here. 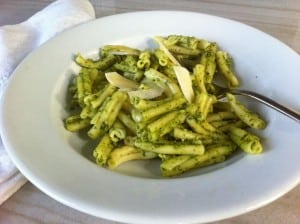 Indeed, much as I desire the benefits of gluten-freedom – which sound quite dreamy, frankly, and make good sense – I cannot imagine feeding my hungry family high-in-vegetables/low-on-time diet without pasta, which cooks up in a hurry, fills everyone up nicely, and serves as an appealing vehicle for whatever happens to be glutting out my CSA.

Right now, that is arugula. As I was driving the boys home from piano lessons at 6:40 last night, I did a mental inventory of the fridge and remembered I had three bunches of it in there, more than we’d ever eat in salads. So the minute I walked in the door, I put a pot of water on to boil then I made an arugula pesto, using almonds in place of pine nuts and a little lemon juice and zest to brighten the flavor.

By the time I was done tinkering with it, I’d used 10 ingredients. Ten! But dinner was ready in the time it took the pasta to boil.

Back when I worked as a food editor in magazines, my editors liked to sit me down now and again and remind me that Americans don’t have time to cook. To which I would say, “Yeah, but Americans watch over five hours of television a day.” Which despite being true back in 2009, was still not something that editors liked to be reminded of by a wiseacre underling.

Whatever. This year, we Americans are expected to watch somewhat less – roughly four-and-a-half hours a day – but only because the time we spend with our digital screens has increased so much.

Which makes me think: surely a few of those minutes are available to be spent cooking – an activity that at least gives you something real and nourishing in exchange for the time you devote to it, which is more than you can say for TV-watching or Facebook scrolling.

On the other hand, who am I to talk? If I hadn’t been lolling around on Facebook after whipping through my dinner-in-under-20-minutes meal, I would never have come across my friend’s comment, which inspired this whole column.

This is delicious spread on sandwiches, or dolloped on grilled chicken or fish (without the cheese). If you’re serving it with pasta, scoop up a cup of the starchy pasta water before draining, then mix together the water, pesto, and pasta.

1 teaspoon lemon juice, or to taste

Combine all the ingredients except the Parmesan in a blender or food processor, and purée to form a paste. Stir in the cheese.