It was a night for recognizing achievements and moving forward at the Oct. 16 (Tuesday) meeting of the Haldane Board of Education.

School Board President Gillian Thorpe said that the district has begun negotiations with an interim replacement for Superintendent of Schools Mark Villanti who is retiring in January. Thorpe told The Paper that the candidate is a retired school superintendent. The interim position will begin January 21, 2014, and run through July 1.

Thorpe also addressed questions as to why the search process has been closed – with no public committee to assist in the selection. “The process has to be confidential or you won’t get the candidates you want,” she said. “The pool is much better if the process is confidential. I ask the community to trust the process.” She said the district surveyed Haldane families regarding what characteristics they would like to see in the new superintendent.

Hazard, Young, Attea & Associates, the consulting firm assisting the district with the search, also conducted two public forums in October to receive similar public input. Thorpe said comments from the public are welcome at any time.

Trustees and administration paid tribute to 16 students for their outstanding academic success. Each received a certificate presented to them by Thorpe and Vice President Peter Henderson. Kieran Austin was honored as an AP Scholar with Distinction and for being a National Merit Scholarship Semi-finalist. Kaeta (Rocky) Shiga was also named a National Merit Scholarship Semi-finalist.

Haldane Elementary and Middle Schools were also recognized for being named “Reward Schools” by the New York Department of Education. Reward School status is given to schools that have the highest achievement in the state or are making the most progress in improving academic performance. Haldane High School received the same honor recently.

One area which earned specific praise from Preusser is the district’s practice of maintaining reserve funds. “We like to see reserves,” he said, pointing out that Haldane began the practice several years ago. “It shows you’re looking at now, but also at what you’ll need down the road,” he said, adding, “Districts that don’t have reserves have had to cut programs,” when faced with recent economic challenges including reduced state aid.

The district’s lunch program presented a relatively minor issue within a budget that tops $22 million, by running  a $64,000 deficit. Preusser said that other districts have experienced the same problem – in part due to competition from local restaurants.

Superintendent of Schools Villanti said that administration is developing a long-term strategy which will maximize revenues as one means of improving the program’s finances. He said part of the challenge is the rising cost of employee benefits. Villanti said he is reluctant to abandon a program that consistently earns accolades from both the Putnam County Health Department and New YorkState. 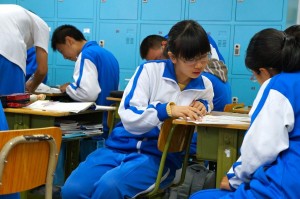 The trip, the cost of which was paid by Wilson, took her to nine of China’s elite schools, in three cities, in eight days. “The relatively new openness of Chinese commerce and society offers intriguing insights into the evolving ideals of an ancient nation,” she said. Part of that evolution is China’s desire to move from a centralized, controlling education system to one that allows more local control over finances and curriculum.

There are certainly more differences than similarities when compared to education in the U.S. Wilson pointed to one glaring anecdotal example – residency laws require a mother to live in Shanghai for 15 years before her child is eligible to attend school. Admission to high school is determined by a two-day exam called the gaokao.

While it is a once-in-a-lifetime chance for students to move on to higher education, Wilson said Chinese families tend to see it as an equalizer within a system with great inequities. While at Haldane eyebrows are raised when class size approaches 25 – in China Wilson found high school classes with 49 students – neatly arranged in seven rows.

All students in China are required to wear uniforms. Wilson said that reforms are slowly being seen, including the emergence of private, international schools. She also said that parents’ voices, and not just that of the central government, are starting to be heard.

At the end of the meeting, Cold Spring resident Joe Vitanza addressed the board and was critical of the cost of education to local taxpayers. He questioned residents’ ability to pay the 3.55 percent increase in the tax levy as part of a $22,345,120 spending plan approved by voters in May.

Vitanza urged trustees to consider adopting a zero percent increase when establishing its budget. “Why not a zero increase sometime?” he asked. “I don’t mind paying my fair share but we’re being taxed to the point that you can’t live here.”

Vitanza suggested that wages be frozen and employees be required to pay more of the cost of benefits. Wages and benefits for Haldane’s unionized teachers and support staff are determined through collective bargaining.

“It’s never enough,” Vitanza said of recent budget increases. “If you got a 30 percent increase I can guarantee you’d ask for an increase again the next year,” he said. Villanti offered to sit down with Vitanza to review the budget process in detail. Vitanza said he may accept the offer.