Although few of us can lay claim to have lived in a small rural county in Alabama in the 1930s, many can nevertheless conjure the sounds of a creaky rocking chair on a stripped away porch, the torpid August air, and three children – a girl and two boys – daring each other to embark on various small adventures. Above all, most can recall, with minute detail, an honorable man, someone whose principals anointed him with a kind of nobility.

Such is the power of a resonant classic, be it book, film or, in the case of Harper Lee’s To Kill A Mockingbird, both. First published in 1960, the best-selling book was then brought to vivid life in the film, released on Christmas day 1962. Now the Depot Theatre is transporting audiences theatrically back to the town of Maycomb, a town whose description reads:

“Somehow it was hotter then: a black dog suffered on a summer’s day. Men’s stiff collars wilted by nine in the morning. Ladies bathed before noon, after their three o’clock naps, and by nightfall were like soft teacakes with frostings of sweat and sweet talcum”

and a town where Atticus Finch, Scout, Tom Robinson, Jem, Dill, Mayella and the others play out their tale of injustice, coming of age and about a thousand other things, again. This adaptation of the book opens at the Depot Theatre on Oct. 25, and runs through Nov. 17.

From left, cast members Olivia O’Blaney, Steve Anderson and director Nancy Swann, during a recent rehearsal. (Photo by A. Rooney)

Director Nancy Swann calls To Kill A Mockingbird  “a wonderful, classic, piece, because it deals with the relationships and the dynamics of a small town.” Swann’s first experience with the material was through the movie. She has since read the novel three times, and recently found herself listening to a recorded version of it, where she “heard things I didn’t ‘see’ while reading it.”

Swann is using a lot of the book, in directing the play. “It is written in memory form, so when I read the book there are wonderful descriptions of the action of the scenes, so I’ve used it, but also all the actors have brought their own personalities to it.”

Swann brought the children together early, ahead of the traditional rehearsal time, in August, to get comfortable enough with each other so that their onstage camaraderie would seem unforced. They swam and played, and “one day on Garrison’s Landing I stashed candy high in the tree,” Swann recalls, “and we pretended it was the Radley house. We also went on a walk down near the marsh and I told the kids they needed to find a fishing pole, so they went and tied bamboo they found together to make one.” 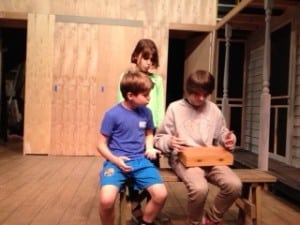 The children of To Kill A Mockingbird, from left, Emerson DelMonte, Olivia O’Blaney and Max Mormar. (Photo by Nancy Swann)

August rehearsals also proved helpful in capturing the heat of the South, an essential: “Recreating the South worked well when we started rehearsing,” says Swann, “because the heat is a big element. It’s so textural, and that element has to be in the play — it’s another character on the stage.” At times, during the outdoor rehearsals, they simply stopped and listened to the crickets nearby.

Getting just the right children was crucial to Swann, the character of Scout in particular. “Scout knows everything. I wanted a tomboy who was uncensored. At the auditions I had them read the rape scene because I wanted them, and their parents, to know what was part of this. When Olivia [O’Blaney, who was cast] came in, she wasn’t soft, she was direct: just popped things out and was perfect. Plus, she looks like my idea of Scout. She’s turned out to be a delight, very focused and full of ideas.”

O’Blaney was thrilled to get the call saying she had landed the role. “It was just amazing; I was waiting and waiting and I knew I wasn’t going to get it, but then I did!” She is fascinated by her character: “It’s amazing how she wants to be a boy so much. I think it’s very interesting that she likes adventures, as a boy would.” O’Blaney, who is 10 years old, calls herself “not really a girly-girl — I think I’m in the middle.”

Tackling the iconic role of Atticus Finch, so associated with Gregory Peck, was not daunting to Steve Anderson, who will portray him in this production. Handily, he had somehow never seen the film, though he has now watched a couple of scenes.

Anderson considers it a classic role, and therefore as open to interpretation as its predecessors: “More than one person can play Hamlet, or Stanley in A Streetcar Named Desire. Besides, Mockingbird is not just about one man; it’s so rich in characters and community. Listening to the words of the novel, the essence of it seeps into you. I wanted to find the Atticus in me, not the Steve in Atticus.” Swann, who calls Anderson’s portrayal, “warmer, more demonstrative” than Peck’s, says she sees Atticus as “a strong, loving, caring father. I don’t see Atticus as someone who disciplines his children. He talks to them like they’re adults. Steve embodied this in the audition.”

Transitioning the Depot stage into Maycomb, Ala. (Photo by A. Rooney)

Anderson elaborates on his role: “There is an Atticus in everyone; as an actor you want to touch that in everyone. The fabulous thing about this is that you have to be connected to the children and there’s magic with the kids in this play, and it’s been a beautiful thing to see this evolve. You don’t often get a role like this: talking to a jury for three hours, plus intimate family time, touching on life lessons.”

All the other familiar characters will inhabit the stage too, villains as well as saints, and those in between. It is Swann’s job to help her actors find dimension in their characters. Quoting pearls of wisdom from Atticus she says, “’You never really understand a person until you consider things from his point of view,’ like with Mayella, here’s this girl; she always washes up, and in this sea of junk there are geraniums in full bloom — she’s responsible for those. Everybody is three-dimensional, some sides are more on display than others. The damaged goods in the play — it’s important to see what would drive someone to do that.”

When it comes down to it, Swann hopes that once again, the audiences will connect with the two main characters: “I love Scout and Atticus is a wonderful human being. I wish we could all be like him.  He embodies being “Christian,” — it’s ‘love thy neighbor as thyself’ and he lives that life.”

To Kill A Mockingbird will be performed on Fridays and Saturdays at 8 p.m. with Sunday matinees at 2 p.m. Tickets are $22 for adults, $18 for seniors, $15 for students and children and can be reserved at brownpapertickets.com or by calling 800-838-3006.