Officials and residents flock to historical site after 16-month hiatus

Scenic Hudson, the WPFP owner, closed the 87-acre site in June 2012 to transform it into a new-old historical park. Located on Foundry Cove along the Hudson River, the WPFP now features benches, upgraded trails that follow the lines of 19th-century railroad tracks, displays with historical information, and other visitor aids – including a parking lot, washrooms, audio tour system, and picnic tables. The $3.6 million construction initiative involved funding from both private and government sources, including the State of New York, with contributions from business and financial firms (even the Royal Bank of Canada) mingling with the dollars of local residents. 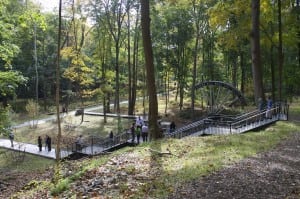 Established in 1817 by private entrepreneurs with the endorsement of the U.S. government, the West Point Foundry manufactured water pipes, railroad locomotives, household and agricultural implements, other ironware goods, and armaments for the U.S. military, including the famous Parrott cannon.

Instrumental in helping the Union win the Civil War, the gun was named after Robert Parrott, foundry superintendent, who took the concept of a rifled cannon and perfected it for American artillery. The foundry’s own name reflects its close association with the U.S. Military Academy at West Point, just across the river.

Philanthropists as well as industrial entrepreneurs, foundry executives were instrumental in establishing local churches and at least one school, as well as homes in Cold Spring and Nelsonville for the skilled workers and craftsmen they employed. (Most mansions of the executives disappeared over time, while the worker houses remain.) The foundry’s success also turned Cold Spring from a tiny hamlet into a thriving river town and led to the creation of numerous other local businesses to serve the prospering community.

The foundry closed in 1911 and fell into ruin before Scenic Hudson, a regional environmental organization, acquired it in 1996. Before Scenic Hudson began a series of clean-ups, the place that in the 1800s made state-of-the art iron products became littered with 20th-century metal junk – like discarded washing machines and car parts – in the woods that grew up around crumbling buildings.

In 1996, “most of the history was buried,” Scenic Hudson Senior Vice President Steve Rosenberg observed before a formal ribbon-cutting re-opened the trails. Now, he said, the foundry can be “a true outdoor heritage destination that we hope will contribute to Cold Spring’s future the way the foundry did in the past.”

Along with its other roles, the West Point Foundry “was one of the first public-private partnerships in American history,” Ned Sullivan, president of Scenic Hudson, told the nearly 200 attendees. He went on to salute a long list of individuals and groups, from both government and private sectors, who assisted with the overhaul. 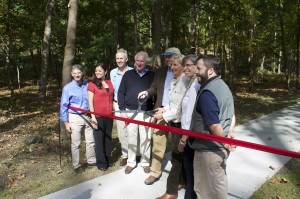 Receiving a plaque in appreciation for the village government’s assistance in moving the project forward, Cold Spring Mayor Ralph Falloon referred to the transformation of the site from a dump to a new interpretive park. “It’s amazing. I never could imagine what this place could turn into. Thank goodness I voted ‘yes’ for all of this” when plans were under review at the village level.

Falloon noted the presence of members of various village panels (such as the Historic District Review, Planning, and Comprehensive Plan Boards) and that “residents are here to enjoy this” t0o. “The sky is the limit” for a place that represents such “a great public-private partnership,” he said.

Frederic Rich, Scenic Hudson board member and Garrison resident, was also honored with a commemoration plaque and naming of the replica of the WPFP gun platform for his leadership and help funding the acquisition of the land and the creation of the project.

Aimee Vargas, regional representative of the Empire State Development Corp., said the state was delighted to work with Scenic Hudson on the project, which meshed with Gov. Andrew Cuomo’s vision of making use of all the Hudson Valley has to offer. It likewise is an example of a way to connect waterfront communities and the cultural and environmental spheres while supporting infrastructure and “green development,” Vargas said.

After official remarks, attendees partook of cookies, sandwiches and hot cider and explored the grounds, some taking advantage of the new audio tours to make the most of their visit.