I fell in love at a party.

I’d spent years hoping in vain for such an event to occur. And then: Bam. There it was.

I remember the night with surprising vividness – perhaps because important events have a way not only of firmly imprinting themselves on your memory, but also of dragging with them all the contextual details your brain might otherwise dismiss. 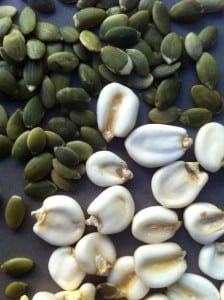 And so I recall parking on the narrow country lane and walking through deep snow to the snug 18th-century house. I recall the mountain of coats by the door, and the crowd gathered by the great stone fireplace, laughing and talking. Happily, I joined them, chatting with people I half-knew. We’d all been skiing that day.

Then I encountered my love, and everything fell away. Everything, that is, except for this magical bowl of stew. Its flavor was so exciting and subtle that I wanted to get lost in it, to understand its every nuance. I sat alone in a corner, spoon in hand, my heart all aflutter.

The stew was Mexican – genuine Mexican, rather than Tex-Mex – and contained chicken, tomatillos, ground pumpkin seeds, and hominy – the last an ingredient I’d long adored.

Hominy looks like a cross between a corn kernel and a dumpling. I’d first encountered it at a tiny Mexican take-out spot I frequented when I moved to New York. There, they served a burrito filling called “green chile posole” – pozole being the Nahuatl word for soup made with hominy.

Hominy itself is made by soaking certain varieties of corn in an alkaline solution so that the outer pericarp – the thing that gets stuck in your teeth when you eat corn on the cob – loosens, leaving behind the starchy inner endosperm. The process gives the grain a wonderful aroma – fresh and vegetal, with hints of mineral and spice – and a soft, pliable texture. Once dried, hominy can be coarsely ground to form grits or finely ground into masa, the flour used for tamales and corn tortillas. 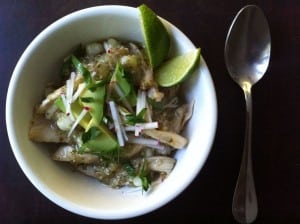 In other words, hominy is lovely to eat. But it’s also incredibly cool. Here’s why: The process of turning corn into hominy was discovered more than a thousand years ago by the natives of this continent. They soaked dried corn for many hours in a solution of potash – the ashes from a wood fire – and water.

In addition to altering the corn’s flavor and texture, this released niacin. And niacin, it turns out, was the one vitamin missing from their otherwise balanced diets. Back then, a vitamin deficiency wasn’t some minor health concern, requiring an over-the-counter tweak. No. Pellagra, as niacin deficiency came to be called, was a horrible, disfiguring disease that resulted in skin lesions, hair loss, paralysis, dementia and, eventually, death.

It took Western scientists until 1938 to discover the link between niacin and pellagra (they became Time Magazine men of the year for their work). Meanwhile, pre-Columbians had intuited this connection on their own, without calipers and densitometers, and without using hapless prisoners as test-subjects.

These days you can buy canned hominy at Foodtown, or dried at C-Town in Peekskill. You can get pepitas – green pumpkin seeds – at Foodtown, too. And tomatillos are in season at the farmer’s market. So this is a perfect time to fall for Green Pozole with Chicken, as the dish is called on Epicurious.com.

Not that I learned its name the night of the party. Naturally, I asked the hostess for the recipe, but she demurred, pretending to have made it up herself. But hello: I’m not dumb. I know this is an age when you can Google-stalk anyone – and anything – that you meet some dark, snowy night. The next day, I typed “posole,” “chicken,” and “tomatillos” into my search engine, and bingo: There was my new love, ISO a new pot to call home.

This recipe is adapted from one that first appeared in Gourmet in 2003; it is now available on epicurious.com. I make it with whole chickens instead of thighs; I poach them, tear off the meat, then make a broth from the bones and other ingredients included in step 1. Be sure to serve the stew with the accompaniments listed: They are wonderful.

1. Prepare the chicken: Bring 8 cups water, the bay leaf, half the onion, 3 cloves garlic, and 1 teaspoon salt to a boil, covered, in a large stockpot, then reduce heat and simmer 10 minutes. Add the chicken and poach at a bare simmer, uncovered, skimming off any foam, until just cooked through, about 20 minutes. Transfer the chicken to a cutting board to cool. Strain the broth, discarding solids, and reserve. When chicken is cool enough to handle, coarsely shred with your fingers.

2. Make the stew: Cook pumpkin seeds in a dry small skillet over low heat, stirring occasionally, until puffed but not browned (seeds will pop as they puff), 6 to 7 minutes. Transfer to a bowl to cool completely, then finely grind in a food processor or spice grinder.

3. Simmer tomatillos and the rest of the onion in 1 cup water in a small covered saucepan for about 10 minutes. Drain vegetables and purée in a blender with jalapeños, ¼ cup of the cilantro, the oregano, the remaining 3 cloves garlic, and 2 teaspoons salt.

One thought on “Mouths to Feed: In Perfect Hominy”