Touts service on three other boards before running

Mike Leonard laughs when asked why he doesn’t like television. The question comes as he is in the midst of describing his several years of civic service on volunteer, appointed town boards. Such service requires at a minimum a lot of prime time evenings sitting in the drafty, if historic, Town Hall while fellow citizens at home immerse themselves in the ever-expanding universe of entertainment fare. 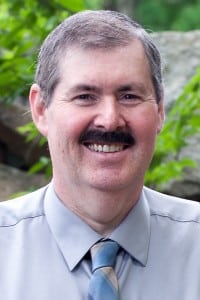 As a candidate for the Philipstown Town Board Leonard wants voters to know he has done his apprenticeship in town issues and is prepared to join the elected five-member board and make a real and immediate contribution toward addressing the thorny, sometimes conflicting, issues such as environmental protection, economic development, appropriate taxation and budgetary allocation.

“I first got involved (in local issues) because I live on Valley Lane in Continental Village. I moved in thinking the road was a public road because I had a streetlight and a fire hydrant across the street,” said Leonard. He was wrong. The dirt road, which turned to mud or worse depending on the season, was private with no one really responsible for its maintenance. “It was horrible. At times I couldn’t get to my house without using other people’s driveways. I needed an SUV just to go 400 feet to my property,” said Leonard.

So he began an effort to garner sufficient property owner affirmation (51 percent of the actual frontage on the road) and then petition the town for public recognition. The property owners had to pay for the initial upgrade but Leonard was successful and along the way he came to admire the Philipstown way of doing things, which he contrasted with his previous experience in Putnam Valley where he said there was a much more contentious political atmosphere.

“The Philipstown Town board was extremely helpful and courteous, it impressed me, and so I got involved in thinking about volunteering.” Over time Leonard said he met with different officials to see what he might be able to do. His thoughts turned to the town Planning Board with its complicated issues of private property rights, zoning regulations and environmental impact. But he found out that the town had standards for its appointments to boards.

“[Richard] Shea, (then deputy supervisor), was polite but said that I didn’t have experience or background to start at the Planning Board.” Leonard, a management level staffer at the New York State Power Authority didn’t disagree. Instead he waited and eventually found a place on the Board of Assessment where he assisted residents seeking to understand and perhaps amend their property’s value for tax purposes. A good way to get to know all the neighborhoods of the town.

Leonard then included membership on the town Conservation Board that deals with property development applications that border on sensitive environmental areas such as a wetland or the river. Leonard explained that the job entails both a passion for the environment as well as an appreciation of economic development.

A glutton for the work, in 2010 he moved to Planning Board while continuing to serve on the other boards. He stressed that this happened because of his willingness to put in the time to learn the issues and listen to all sides to get the right results. For each of the positions he reminds us “you have to go before the Town Board with your resume and prove your qualifications. Some very experienced, talented people serve on these boards,” said Leonard, emphasizing there was representation from different political persuasions.

It was after he stepped in for the chairman of the Planning Board, a job that involves much more public engagement than a regular board member, that people began to ask him to consider running for the Town Board.

“Betty Budney asked me personally to run and I respect her greatly. She doesn’t get nearly enough credit for all the things she does,” said Leonard. He acknowledged that he changed his voter registration from Republican to Democrat to make it easier to run with Shea and John Van Tassel as a team on both the Democratic and the Team Philipstown lines. He said it wasn’t an abrupt move since he had worked on town Democratic campaigns beginning in 2007 because he admired the people running.

“I still have differences (with Democrats) on national issues and I was upfront about that. I respect their willingness to accept someone who had different views from them. That impressed me.”

Living in Continental Village Leonard is familiar with dirt roads, property taxes (some of the area is in a Westchester school district) and storm water management. He is especially interested in transportation for the older citizens of the town, very much including his own neighbors who often feel isolated from their town government and services.

He envisions “regular transportation that will take people to doctors and dentists and encourage them to keep their business in town. This a key piece for me if I am elected,” said Leonard, recalling jitneys in the Atlantic City of his youth as a possible model for consideration.

Not all candidates for public office enjoy the campaigning for votes particularly on the intimate retail basis a local election requires. But Leonard is ebullient about the experience and the process.

“The door to door is the best part of the whole thing. Coming home from work and going right out trying to catch people at home.” He said he loved talking with people about how town government works and what he has done in the process. And of course he enjoys explaining why people should vote for him.

“To me it’s not really about the position, its about the opportunity. I see this as my volunteer years. My two kids are in their 20s. I am in a position to give something back. There are a lot of talented, capable people in the town but it is also a question of availability, being able to make the meetings and do the work. This is my time, when I can do it.”