Lack of services in Philipstown at issue 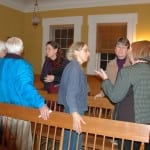 At the Oct. 22 session at the old courthouse in Carmel, Philipstown seniors, joined by Town Board Member Nancy Montgomery, urged the county government to upgrade local services without further delays. While seniors elsewhere meet in well-equipped, purposely-designed centers, Philipstown’s residents make do with borrowed space in the American Legion, which accommodates the county-run noon meal program and a few pastimes, such as video games. They also engage in activities paid for by the Town of Philipstown – not the county – such as exercise classes at the senior citizen Chestnut Ridge apartments.

The Legislature convened the hearing to get public feedback on the $142.9 million 2014 budget proposed by County Executive MaryEllen Odell. Outside of the Philipstown delegation, few attendees spoke up.

“I’m here to advocate for the citizens of Philipstown,” beginning with the quality of the senior-citizen lunches served, Montgomery said. (Participants often assert that the “hot” dinners arrive cold and look unappetizing, if not inedible.) “We can’t wait anymore to see” improvements, she said. Montgomery observed that for a decade, the county and town have talked about better programs for Philipstown seniors. “I hope with this next budget you can take a look at their needs,” she said. “I think we can get creative with the budget” and do something more.

She also urged more county attention to Philipstown overall, including emergency services, particularly involving technical communications equipment. “If we could just improve communications,” through upgrades and more interaction, she said, “that would be great.” While seeking a fair share of county services in Philipstown, Montgomery praised the legislators for their “hard work on the budget. We appreciate that.”

Lynda Ann Ewen, a member of the Senior Citizens of Philipstown, an organization with at least 90 active members, said they “are very anxious to have their voice heard.” The seniors’ current lunch site “is just a very poor facility compared to Putnam Valley,” which, she said, “is like a resort. Our people cannot drive to Putnam Valley. Seniors do not have the mobility. We’d like a little more input into what your plans are” for Philipstown, Ewen told the legislators.

A sociologist, she noted that with an aging American population, “in 10 years the question of senior programs is going to be overwhelming. You can either pay the bill for Alzheimer’s” or provide the physical and mental stimulation that helps stave it off, she said. “To make this county senior-friendly would be a very powerful thing.”

Ewen criticized the format of the 191-page county budget. “We’d like to see the way the Office for the Aging is broken down among the six townships,” she said. “There’s a sense Philipstown is getting short shrift.”

“I was surprised how inadequate the facilities are” in Philipstown, added Manny DaCunha, who moved to Glassbury Court, the complex serving middle-income retirees on Route 9.

Shirley Norton, who lives in Chestnut Ridge, said that since arriving two years ago she has repeatedly heard “how desperate we are for a facility.” The Butterfield redevelopment project, long viewed as a logical location for a senior citizen center, “is just not happening” and a refurbished American Legion has been suggested as an alternative. “We’d like to know the ins and outs to accomplish” things and get “what we need,” Norton said. “It’s not just something we need right now. It’s something for the future.”

She called for more dialogue between Philipstown and county officials: “I’m hoping we can develop communication so we can understand what you’re up against and what we are up against.”

Carol Donick, director of the Desmond-Fish Library in Garrison, urged the legislators to hold firm on the draft budget’s allocation for libraries. She had likewise addressed the Legislature on Oct. 2, when Odell presented the draft.

Legislature Chairman Richard Othmer described some of the dilemmas legislators confront at a time of economic difficulties. “They give us $10 and we have to split it up 500 ways,” he said. “We had to reduce some salaries in our own office.” He commended his colleagues. “We all put a lot of thought into this budget.” The legislature can revise the version Odell introduced and Othmer hinted at its willingness to do so. “You’re a very independent Legislature, not beholding to anyone,” he commented.

After the hearing, asked about her constituents’ pleas, District 1 Legislator Barbara Scuccimarra said “I understand their frustrations and I think we are working toward a solution. The Butterfield project is back on track and I think we’ll have a senior center,” she said. “I think that’s the best spot.” The Cold Spring Planning Board has been intensely reviewing the Butterfield concept and Scuccimarra said the question no longer is “if” the project will go through, “it’s ‘when’ is this project going to go forward. I’m confident it will.”