Town Board candidate seeks re-election on his record of service

John Van Tassel wants voters in the upcoming Philipstown Town Board election to know that he is a “grounded individual.” Grounded for him takes on several meanings. It refers to his several-generation historic roots in the place he lives with his family and also works. 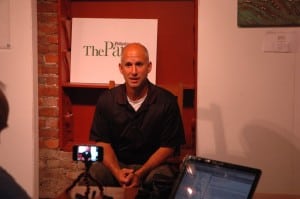 Van Tassel being interviewed by The Paper.

“I have a great knowledge of the town,” said Van Tassel, a one-term Democratic incumbent, in a recent interview with The Paper. The source of his knowledge of local issues and appreciation for local people began, he said, in his teenage years when he started as a volunteer firefighter in the North Highlands Fire Company.

Over the years he said he rose through the ranks through training and hard work and ultimately became a chief. After getting elected to the fire district board, which is the taxing authority for fire services for that area of the town, Van Tassel said it was a “natural progression for me to move to the Town Board after I was asked to run.”

Asked about significant Town Board accomplishments Van Tassel replied: “I have done a lot of work getting the town prepared for natural disasters. We haven’t had any real disasters. Sandy and Irene were as close as we’ll get to that, hopefully. He said he had worked closely with fellow Town Board member Nancy Montgomery and Cold Spring Mayor Ralph Falloon in setting up the local disaster coordination center at the North Highlands firehouse. “Doing that [during the storms] made a big difference in limiting the town’s liability, in documenting the effects as well as in the recovery effort,” Van Tassel said.

He said he is working on a new communication to town residents and business on what to do and where to go when the next storm arrives “because there will be another.”

Van Tassel said he was also proud of the effort the board has made on updating the zoning code. He credits the leadership of Town Supervisor Richard Shea in shepherding the zoning changes by driving consensus through a deliberate, patient process. “That took a tremendous amount of work. We listened to the residents, the businesses, especially those along Route 9. Nothing is perfect. We continue to work at it,” he said, citing clarity on alternative energy projects as a needed area for review.

Recreation important to quality of life

Championing the activities of the town recreation department is another of Van Tassel’s signature points of the record he offers for consideration. He serves as the Town Board liaison to “rec” and he believes fervently in the town government’s role in providing programs for children and adults including special classes for seniors at Chestnut Ridge, the Depot Theatre cultural program, as well as the array of sports and crafts classes offered at the town recreational center in Garrison.

“I have two young children … the ‘rec’ makes for a big part of the quality of life in Philipstown. People are interested in these programs as part of their decision to move here,” said Van Tassel.

Here he again emphasized the importance of collaboration in proposing and making decisions that benefit the community. He cited the fields committee that studied the various options for upgrading athletic facilities in the town and ultimately agreed that an improvement at the Haldane school field was the most viable option. “Once we saw that was the best way to go everyone got behind that project and made it happen,” he said.

Similarly Van Tassel pointed to the effort to construct a new facility that would include an ice skating rink and a concession stand at Philipstown Park located on Route 9D in Garrison as a model for future projects. In that effort there is a public/private partnership wherein the nonprofit Friends of Philipstown Recreation has raised funds for the project. “The town [government] couldn’t just do it,” he said.

The constraint on the town budget, evident in the park project, is overall one of the biggest challenges Van Tassel sees confronting the next term of the board. While he is committed to remaining within the state’s 2% rule on local government budget increases, he warns of consequences, especially since the state has tightened rules governing areas exempted from the rule.  “The cap is a great challenge. We are telling a lot of people no (when they request things). We don’t want to cut services. We’re doing our best to hold the line.”

Perhaps the most contentious issue with big budget implications Van Tassel has taken on is the town’s relationship with the Garrison Volunteer Fire Company (GVFC). The fire company (unlike other companies) receives its funding directly through the town and has at times chafed under budgetary scrutiny from the board, especially from fellow firefighter Van Tassel who has 31 years with the North Highlands company.

“I told them from the beginning I have used that knowledge and let the board know what I feel is appropriate,” Van Tassel said. He has urged the GVFC to reorganize into a fire district (like North Highlands) so that they can govern themselves through public elections and go directly to the people for their budget. However, he said, “We have made tremendous progress on the issues. They know if I have proof of a need from them, then I will fight for it tooth and nail.”

Seeking balance between protecting and building

“I believe in the necessity to preserve Philipstown. No place is more beautiful. That’s a big part of the job.” But, he adds, “I make my living here, most of the time as a contractor/builder. We need to provide for more economic activity. There is a wide spectrum of income from the very highest to the very lowest. There has to be a balance that keeps the town affordable and viable while protecting the beauty of it.”

Van Tassel said he is particularly concerned about the ability of seniors to sustain themselves in the community. “I base a lot of my decisions based on my parents’ generation. They built this community.”

One thought on “Van Tassel Guided by Generations Before Him”