Stop, think, act, reflect. These four strands stand as powerful actions in a new school-wide program at the Garrison School.

Arising “as an offshoot of issues we were having with children,” according to Garrison School Principal Stephanie Impellittiere, the school has implemented the program with the acronym of STAR! A simple enough concept – helping children by teaching them to make better choices that they don’t always know how to handle in social situations – Mike Williams, the school’s guidance counselor, says it is effective precisely because it is so simple. 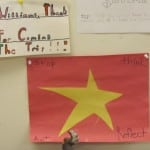 A STAR star adorns the wall of Mr. Williams’ classroom.

“We started it last year as a pilot with what were then first graders,” he said. “Originally we had so many posters up in the classroom about a lot of different things. They were great, but it was confusing for them. I decided to take all of that away and make it just this one thing. It opened things up for them and now we’ve used it successfully from kindergarten through third grade and have found that the kids have started talking about it and using it in different settings — not just when I’m around.”

Impellittiere says STAR “helps children internalize how they can help others. It’s easiest to teach them skills through hands-on activities; they internalize this better than through, say, guest speakers at assemblies, and it becomes part of a bigger picture.”

Williams found details of the program in a book, from which he then took away his own version to try with the students. He meets with each class once every couple of weeks, and, now that the kids understand the concept, uses the first part of every lesson to ask: “Since the last time I saw you, when did you use STAR?”

A recent, and typical, answer: “I was just about to interrupt the class, then realized it would take time away from recess if I did.” Williams describes the “think” component as “stopping and thinking not only how it’s going to help ‘me’ but how does it help others. We’re trying to create empathy.” 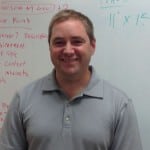 Williams says feedback from other school staff indicates that the influence of the program is being felt in other classrooms. Teachers are weaving these themes into reading and writing exercises in the academic subjects. It extends beyond the classrooms as well. “We recently had a couple of kids in trouble on the bus,” Williams said. “We talked to them about it and asked them to ask themselves ‘What can I do differently next time?’ as reflection is probably the biggest part of the program — taking the time, those moments, to reflect, before acting. Just pointing out to them that they made a choice and didn’t reflect.”

Taking the tenets of STAR beyond just the guidance period, the concepts have been brought to things like the K-2 music concert, where some of the song lyrics echo the STAR sentiments, as well as to the “Garrison Gems” K-5 assemblies, which address a different theme each month; this month’s is “respect.”

At these assemblies the children perform skits and showcase projects sharing what they’ve done in the classroom as well as sharing other positive things and celebrating their birthdays. These monthly (sometimes every other month when holidays intrude) assemblies were started this past February and have been a big success, according to Impellittiere.

Tied in to this more loosely is another initiative, this one sponsored by the Garrison PTA. Called “Giving Thanks,” its aim is to make children think more about being appreciative for deeds done by others. There will be a kick-off assembly on Nov. 8, honoring veterans, and there will be a school-wide food pantry drive as well, tied into a concert on Nov. 14. A culminating assembly on Nov. 22, right around the time the collected donations are delivered, will emphasize where the food is going and its purpose and reason.