In April 1994, after months of negotiations, board meetings, and bank transactions, I bought my first apartment, on the far west end of Bleecker Street in New York City. It was tiny and quite beautiful, with an ornate working fireplace and windows front and back that looked onto treetops. The day I was handed the keys, I called my friend Sally Ann and invited her over for a celebratory picnic dinner.

There was not yet a single piece of furniture in the place, but I did have a kitchen – a kitchen! – so I lugged over a sack of dishes, a chicken to roast, a few leeks and potatoes, and some salad greens.

Sally Ann brought wine and candles. We planned to sit on the floor. 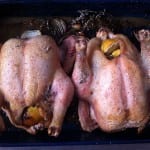 As I would later discover, my oven ran about 75° hot. Moreover, I did not really know how to roast a chicken. I had loads of experience, having tried every which way, but I’d never produced a chicken with tender, flavorful, cooked-all-the-way-through-but-not-dry flesh.

This weighed on me, because knowing how to roast a chicken mattered. Every foodista in New York could recite the maxim that a roast chicken was the real test of a chef. If you wanted to vet a restaurant, for example, you were meant to order the roast chicken because that would tell you if you were in the hands of a genius or an upstart.

Adding to the pressure was the fact that I was working at Martha Stewart Living at the time, and, as you may know, Martha was a bit of a stickler when it came to getting things just right.

So I surveyed all the professional cooks I knew, and followed the instructions of the most authoritative one. I needn’t have bothered. About 30 minutes into the roasting time – and halfway through the first bottle of claret – the juices on the bottom of the pan started to burn. By the time I ran to the kitchen, the oven was full of smoke. When I opened its door, the cloud rushed into the living room, setting off the smoke alarm.

I forgot to mention that my apartment had 10-foot ceilings, and neither Sally Ann nor I was 10 feet tall. So we ran around, looking for anything to stand on, but apart from a colander and the blackened roasting pan, there was nothing moveable. The toilet, radiators, and stove were all annoyingly anchored in place, which at the time struck us as a perverse quirk of building construction.

Eventually, through the shattering din, we realized that wobbly Sally Ann would have to climb onto my even wobblier shoulders. With a few violent whacks, she managed to shut the thing up.

The silence was lovely. The dinner was not, though the wine helped.

In the years that followed, I continued to try to master roast chicken. I tried Marcella Hazan’s legendary 2-lemon masterpiece. Eh. I tried trussing and not-trussing, rubbing butter under the skin, starting the chicken belly-down. I tried high heat and low, and switching from one to the other. I tried brining and basting, herbs and garlic. Most of the time, my chickens were fine. But for all the trouble I was going to, I wanted more than fine. I wanted great.

Last summer, in under 30 minutes, Tonya, one of the cooks at my summer camp, prepared a dozen whole chickens and popped them in the oven. I didn’t say anything to her, not wanting to call attention to my own ineptitude, but I mentally bookmarked the event. This fall, when fresh (i.e. not frozen) chickens showed up at Glynwood, I emailed her. The recipe below is verbatim what she wrote back.

I had already tried every single thing she mentions, many times in fact – except that little, key parenthetical: (no oil). Could that be the secret? When I followed her instructions (minus the herbs under the skin), it came out perfect.

All the same, I am not convinced that this is the ideal recipe for everyone. In fact, given how many “perfect” roast chicken recipes exist, I suspect that there may be one for every cook – or at least for every willful, quirky oven.

This, at long last, happens to be mine.

I always roast 2 at a time; my family appreciates the leftovers. If you do so, too, make sure there’s enough space between them so they cook evenly on all sides.

425 degrees or higher, stuff it with half a lemon, half an onion, some garlic and herbs of your choice. If I feel fancy, I put some herbs between the breast skin and meat – you can lift up the skin to push the herbs in (rosemary or thyme works best). Add veggies to the pan, if you want. Rub the top with salt and pepper only (no oil). About an hour. Rest 10-15 minutes before carving.