‘Order in the court’ threatened by phones, videos, fear of weapons

Philipstown’s Justice Court needs better security to thwart attendees who boorishly wield cell phones or video-recorders and whose conduct prompts fears of weapons entering the courtroom as well, one of the town’s two justices told the Town Board last week. 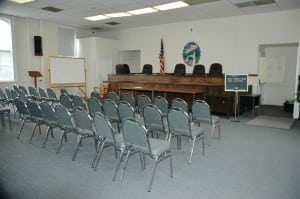 The Philipstown board meeting room doubles as a courtroom for the town justice court.

At a workshop Thursday night (Oct. 24) on the pending 2014 town budget, Justice Stephen G. Tomann cited the problems he sees from the bench in presiding over a roomful of individuals who’ve allegedly run afoul of the law. To enhance security, he called for a regular police presence and other security measures, such as monitoring by a metal detector-screening machine at all court sessions.

“We have a security problem,” said Tomann, a veteran judge and attorney. The situation is often worse on traffic court night than on court days when more serious criminal proceedings are underway, largely because at the latter a metal detector is typically employed and at least one sheriff’s deputy is present, he explained. By contrast, when traffic violations and ostensibly less weighty cases come up, frequently no state troopers or deputies come to court – or, if they appear for a certain case, do not remain for the entire session; the metal detector is not utilized, and bad behavior manifests itself, the judge said.

He said as many as 80 people can be in court, held in the upstairs meeting room at Town Hall, and that a relatively small number typically refuse to turn off cell phones or video-record the proceedings (raising the specter of justice court sessions showing up on YouTube), despite courtroom rules that ban such electronic devices and disruptive behavior. “You can’t stop them. They’ve got no respect” for a judge, the law, or courtroom decorum.

“It’s a very serious problem,” Tomann said. “That kind of thing is very, very difficult” to control. He acknowledged that addressing the concerns takes money but warned that “the consequences of not budgeting” could be significant. 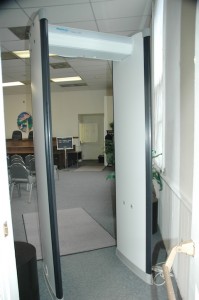 The metal detector-screener machine stands in the entrance to the courtroom-meeting room and a judge recommends it be moved downstairs in Town Hall to increase effectiveness and safety.

Among other steps, Tomann proposed that the metal detector be moved downstairs to the Town Hall entrance to increase its effectiveness and that it be used regardless of the type of cases being heard.  Likewise, a visible law enforcement presence would help. “I think it should be every night we have court,” he told the board.

“We should come up with a mechanism” to deal with the security issue, Supervisor Richard Shea agreed. “If we have 80 people in this room — geez…”

“They could bring in a gun, a camera,” or anything, Tomann pointed out.

“What shows up most of all is we have no security” at Town Hall overall, for public meetings, Councilor Nancy Montgomery observed.

The board members and Tomann discussed immediate options, such as asking the Putnam County Sheriff’s Department to play a greater role in providing security and enforcing court rules, having the town hire special security officers for court duty, and ensuring consistent use of the metal detector.

Montgomery cautioned against solutions that put the burden on the town government. “We don’t want to let the county off the hook again for yet another thing,” she said. Philipstown officials have been seeking more county services for the western part of the county, widely regarded as under-served compared to the eastern side.

“We’ll reach out to the county,” Shea promised, noting the support the town government has given the sheriff’s department over the years.

Town Board Member John Van Tassel suggested an action with longer-term ramifications as well. “We’ve thought 0f retro-fitting this building. Obviously, security has to be part of it,” he said.