One way to extend the market for products grown and made on remote farms is to build boats, load them with goods, set sail down a river, stop at towns along the way that have accessible markets and sell your cargo right from the boat.

If this was 1813 you might think, hey, it’s about time. But two hundred years later with freight trains and interstate highways built for tractor-trailer trucks the idea seems a wee bit outdated.

Perhaps it was the notion of sailing against the tide of history and the challenge of the Hudson estuary tide as well as a healthy dose of environmental rethink that helped Erik Andrus believe he had hit upon a project that could reincarnate an earlier period’s method of commerce that would actually pay benefits all around. 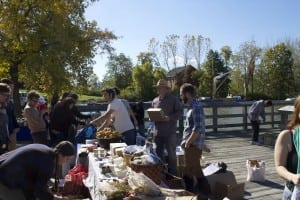 “I love being on the water, I am passionate about energy conservation, I love farming, and I love making stuff out of wood,” said Andrus when asked about the origins of his, at this point, experimental Vermont Sail Freight Project. Andrus stood under a wide straw hat on the Beacon dock on a crisp autumn Sunday (Oct. 20) with the barge Ceres moored behind him and the Beacon Farmers Market as his setting for presentation of the idea that products from Vermont could be sold along the Hudson. He interrupted his interview several times to assist customers drawn to the table containing offerings (including honey, sauerkraut, salsa, corn, various flours, grains, dried beans, fall fruits) from the state synonymous with fall.

“We want to build a fleet to serve farmers, I think if we can do it with one boat we can do it with 50,” said Andrus with a twinkle in his eye. He laughs when confronted with a skeptical face. But make no mistake, he’s not kidding.

Andrus points out that the business model his group is rehearsing, with support from the Willowell Foundation, involves buying products and non-perishable produce from participating Vermont famers. “We meet or exceed standards for wholesale buying options for farmers. The farmers aren’t taking any risk. They can attain distance marketing without a lot of work so they are excited about that,” he said.

Continuing, Andrus said, “There is a magnetism about the mission and being associated with this kind of transport and using the waterway to connect producers and markets. They [the farmers] get it on a gut level that this can work because it’s a historical fact it has worked in the past.” 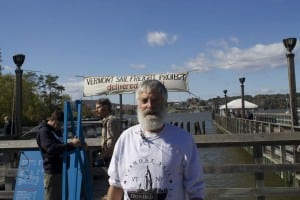 Steve Schwartz, captain of Ceres and the Woody Guthrie

While the current pilot voyage was a north-south run that culminated in visits to two New York City markets, Andrus said he recognized that the older geographical pattern of inland farms and seacoast consumers is outmoded. He acknowledged that there are farmers and markets checker boarded all over the region. “Maybe it makes more sense to be hop scotching around with our trading fleet rather than going from source to destination in one big long jump. I think there is a lot of potential to involve farmers in the southern [Hudson] valley and move their markets north maybe even as far as Montreal.

Sharing Andrus’ enthusiasm and taste for the adventure of the journey was the captain of the Ceres (named for the Roman goddess of agriculture), Beacon resident Steve Schwartz. “I have a history of making bad decisions which can lead me to a crazy project like this,” said Schwartz mischievously.

Sporting a grey beard that had him looking very much the salty dog, Schwartz explained that a crew member of the Woody Guthrie, which he regularly pilots for the Beacon Sloop Club, had noticed the Vermont Sail  Freight website and they decided to invite Andrus down for a sail and discuss possibilities. Schwartz believed correctly that his navigational experience on the Hudson, in New York harbor and on Lake Champlain could prove useful to the project. The sail from Vermont involves maneuvering through 56 miles of canal locks before entering the Hudson.

Schwartz affirmed that the first sail is a test run. “We’ll see if we’re still standing. We have the winter to evaluate, to see what was good out of this project and what needs adjusting. We have hopes we can do this on a regular basis going forward, possibly even with a multitude of boats.”

He hastens to add that the barge(s) will only travel during the half season that the canal system is open. He said the Ceres with its crew of three is expected back for storage at Andrus’ farm before Nov. 15, when the canal locks close for winter. 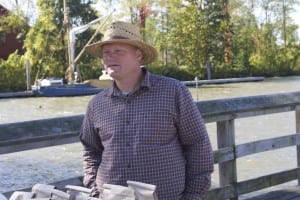 Schwartz waxed poetic about following the foliage season down the river with the weather mild and the water calm. However, he candidly admitted that the crew had done little actual sailing and instead had to rely on the auxiliary outboard engine to keep to the schedule of events planned as well as media appointments. He said he would expect any future efforts to include a fair amount of sail use in keeping with the alternative energy commitment of the project.

Deploying both new and historic technology, the plan going forward might involve enabling people to track the barge online and have a sense of when, depending on the current, it will arrive with goods preordered online.

Schwartz said there is still a learning curve for sailing the barge on the Hudson with a rig designed for the more placid Thames River. He already knows the sails will need adjustment.

He also emphasized that the barge “is not a pleasure boat, it’s designed to carry as much cargo as possible, as economically as possible.”

Time will tell if the Ceres and a fleet of other vessels laden with goods for riverfront markets will reinvent commerce by plying the Hudson.