“It’s one of the first things people will see when they approach Main Street,” said Kamel Jamal about his new community garden. “There’s no better way to tell visitors what Beacon is. I could put a patio here, but that doesn’t say anything.”

Jamal is referring to the 20-by-25-foot plot of land next to his restaurant, Tito Santana Taqueria, at 142 Main St. “It’s for anyone who might want to get involved,” he said. What is now an unmapped plot of land will, by next spring and beyond, bring forth tomatoes, squash, zucchini, cucumbers, beets and ginger. Much of what will be grown in the garden is earmarked for Tito Santana’s menu, which has been attracting a devoted following since 2012 and has expanded to include more vegan options. Sunflowers will accent rows of corn, a staple of Mexican cuisine. 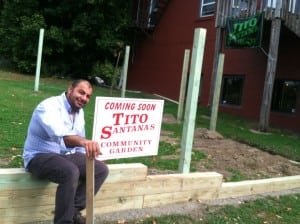 “The garden will be segmented according to who participates and what they want to grow,” said Jamal. “It’s a co-op, the only ‘fee’ being a commitment to maintaining your designated area and sharing basic chores.” He hopes to also use the garden as an education center for young green thumbs, and to provision Beacon’s local food pantry. Zero to Go, a local business that provides reverse-logistics services, is on-board to set up the restaurant as one of only a few public compost sites in Beacon.

Hop plants will also be grown in the garden, primarily as a novelty. Jamal recently rented a storefront at 469 Main St., that will be opening soon as a homebrew supply shop, right across the street from The Hop Beacon. He plans to work with Dutchess Hops, the first commercial hops farm in the Hudson Valley, to support and help promote local home-brewers who just might be “the next Sam Adams.” “You know what they say, it takes a village to raise a child,” said Jamal. “If you can web everything together and make it work hand-in-hand, it’s a no-lose situation.”

Jamal says his new retail store and the community garden represent the changing “wants and needs” of Beacon and its increasing diversity. He should know. Twenty-two years ago he owned the Coastal gas station here with his brother, which he says was “mentally and emotionally draining” at that time. Fourteen years ago he was married at the Masjid Ar-Rashid mosque. Today he lives in the Hudson Valley with his family. He also owns Angelina’s in Cold Spring.

“When I say ‘diverse,’ I’m talking about food and culture, as well as ethnic backgrounds,” Jamal said. “Before I was selling cigarettes and 40-ounce beers. Today, we’re selling art. We’re selling our passion, and people appreciate it.”

Anyone interested in participating in Tito Santana’s community garden should call the restaurant at 845-765-2350.

2 thoughts on “Planting a Future”