Trees in Philipstown have taken a beating in recent storms. At this time last year, our landscapes were devastated by flooding and high winds from Superstorm Sandy and the year before we had a heavy snowstorm that hit while trees still had leaves. Entire trees and large branches brought down power lines, damaged property, blocked roads, and caused injuries and deaths throughout the region. Since then, anyone, including our utility companies, with a large tree nearby has looked at it differently. 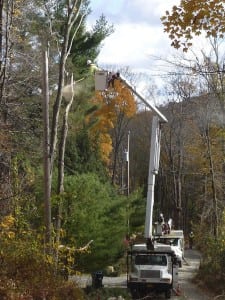 Work crews take all the branches off a tree and leave a stalk next to the road.

Yet some of our efforts to improve safety can do more harm than good. Recently, a crew sent by Central Hudson made its way along the road where I live above Fahnestock State Park, hacking away with a hydraulic chain saw at any tree branch near a power line. The result was a line of trees reduced to stalks without any branches or with branches only on the side facing away from the lines. Some trees, like the white pines in my neighbor’s yard, were topped, the upper portion of the tree removed.

If you were at home during the day when the crews were at work, maybe you could haggle with them like one of my neighbors did, getting them to take down an entire tree when the remains of their efforts were so unsightly or damaging that what was left needed to be removed. If you weren’t home, then you returned to the shock of your altered landscape and there wasn’t anything to be done, the damage was already inflicted.

Topping trees isn’t an effective way to manage growth. Cutting off the canopy makes the tree vulnerable to disease and pests. A tree is programmed to grow up and out. I consulted Ralph Robbins, an arborist and vice president of SavATree about the pruning, if you can call it that, I’d observed on my road. “We don’t believe in topping a tree. A tree can be thinned or pruned if they’re blocking a view or interfering with lines, but never should be topped.”

Robbins commiserated and said he had a mature spruce tree on his property that had been hit by the crews as well. “Their instructions are to clear a certain area, but they left dead trees across the road from the power lines that are likely to fall and take out the lines anyway,” he said. While some risks may have been addressed to prevent power outages during storms, many other problems remain. 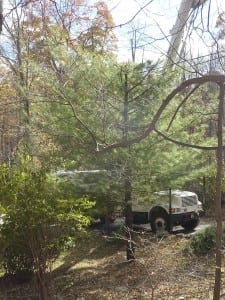 A white pine that’s been cut back from the top.

As to the state of the trees that have been affected by this round, Robbins was encouraging. He advised calling an arborist who could do a free consultation about the condition of the trees and possibly reshape the trees or advise if they should be removed. “Right now the canopy shuts down and it’s a good time to prune and feed evergreens and deciduous trees. It helps the roots develop and set the tree up to come back strong in the spring.”

Homeowners and landscapers can do their part, too. When planting trees, pay attention to the proximity of power lines, light exposure and buildings. Consider what the tree will look like when it’s full grown, how wide and tall it will become and whether this particular tree will work in the landscape not just now, but in the future. That’s the first step to avoiding a problem like this.

Before pruning any tree on your own, research the best methods for the particular tree. Depending on the result you’re seeking, there may be different approaches and timing to get it to do what you want. Evergreens have different needs than deciduous trees and shrubs are also unique in the techniques that create optimum results for the health and safety of everyone involved – people, trees, buildings and power lines.