In past autumns, as leaves fell and temperatures dipped, Executive Chef Vin Mocarski and his culinary staff prepared their final soups and sauces and sealed the kitchen doors at Valley Restaurant for the winter season. But this year Valley will remain open while winter winds blow, serving up its signature contemporary cuisine, laced throughout the year with ingredients from its own farm a few steps from its kitchen, and other Hudson Valley farms and food producers. 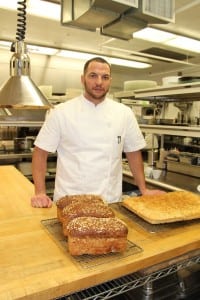 Executive Chef Vin Mocarski manages operations in the Valley kitchen as well as other food and beverage outlets at The Garrison and Highlands Country Club.

When it comes to restaurants, Mocarski likes a good balance. He dines out often, skipping the opportunity to cook at home to stay connected with other chefs and their creations. If you appreciate fine dining, an elegant country atmosphere and spectacular scenery, you can savor the steady presence Mocarski strives for at Valley Restaurant at The Garrison.

“Everything we do here, from plating to ingredients, is balanced,” Mocarski said. “Every day I learn from our staff, from cooks, each other. You have to stay with your roots but keep up with the times.”

Mocarski treasures the roots he’s established at Valley, and his affinity for the greater Hudson Valley is homegrown. It was no surprise to friends and family when a teenaged Vinny began researching culinary studies at the Culinary Institute of America. Growing up in nearby Wappingers Falls, he loved the cooking life from the start.

“I was making marzipan candy with my babysitter when I was six years old,” Mocarski said. “All the other kids were swimming.”

The young Vinny also shadowed his mother and grandmother in the kitchen, and grew up around the family table. When the time came in 1997 to begin his studies in Hyde Park, Mocarski pursued the program with a fierce commitment. He finished two years later and was selected to be an assistant teacher in the CIA Fellowship program, completed in 2000. Soon after, he left the area for a cooking opportunity, but before long roots pulled him home. After returning to Wappingers Falls, where he still lives, he landed a position with The Garrison, and has moved up the ranks over the years in its food and beverage establishments.

In October 2012, he assumed executive culinary responsibilities at The Garrison as well as its other Philipstown property, Highlands Country Club. When he’s not fashioning seasonal menus at the restaurants and lounges at both locations, Mocarski is creating lasting memories for the many weddings that he also oversees.

Working with him side-by-side is Pastry Chef Laura DiGiorno of Yonkers. For the last seven years, she’s been part of the closely-knit team that Mocarski values. 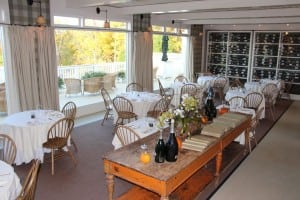 The dining room at Valley, offering pristine views of the Hudson Highlands.

“The freedom that I have with the menu is great,” DiGiorno said. “I have the freedom to be as creative as I want.”

DiGiorno’s freedom and creativity recently resulted in mini deep-fried apple pies. Served with a sour cream vanilla dipping sauce, the mini pies are currently offered as a Valley dessert selection. But menu items are forever changing with the seasons.

“We just finished up our own tomatoes,” Mocarski said. “And our last harvest was leeks, acorn squash and baby rainbow carrots. Valley is really about seasonality, a fantastic menu, great wine list and excellent desserts.”

“Our poached Maine lobster risotto has been on our menu for some time,” Mocarski said. “It’s a favorite.”

Though Mocarski and his kitchen crews work long hours, he continues to draw inspiration from the pace of his work.

But when he’s not ordering from purveyors, checking menus with his front-of-the house manager or standing over one of his food stations, the athletic Mocarski is staying fit and working up an appetite for his next tasting. 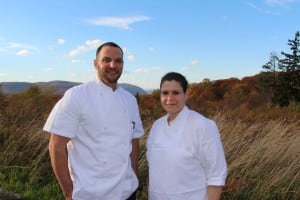 Executive Chef Vin Mocarski and Pastry Chef Laura DiGiorno outside their kitchen at Valley Restaurant at The Garrison.

Establishing a fitness routine during his days at Ketcham High School in Wappingers Falls, the active chef makes the most of his time on days off. And his close working proximity to the The Garrison Golf Club provides more than a view of the 18-hole par 72 championship golf course. This chef plays the course and swings his clubs as often as possible.

“I love golfing, I love working out and I’m dining out in the city a lot. It’s a passion,” he said. “Food brings people together.”

During Hudson Valley Restaurant Week, Nov. 4 through 17, Valley is offering Mocarski’s seasonal American cuisine for less than $30 per person. Dinner is served Thursday through Sunday, with a full brunch offered on Saturday and
Sunday. Valley is located at 1 Snake Hill Road in Garrison. Visit thegarrison.com or call 845-424-3604 for reservations and information. Visit hudsonvalleyrestaurantweek.com for a full list of participating restaurants.