Addressing a group of Haldane Drawing and Painting students, renowned artist Dennis Kardon, whose work is included in the collections of MOMA and The Met, told them “I could spend days trying to get this right — we have a half hour!” The “getting right” was portraiture, in charcoal combined with a kneaded eraser, working the charcoal and the eraser by moving both back and forth, finding the shape of things by adding and subtracting, a method Kardon has developed and used for years.

Kardon instructed the class in the second part of a two-part visit over two weeks, coinciding with his tenure as the Garrison Art Center’s 2013 Visiting Artist. As well as being the subject of a current exhibition, Seeing Through Surfaces at the Art Center, Kardon led the workshop at Haldane and another at Westchester Community College and conducted a discussion with local artists.

The Visiting Artist Exhibition and Education program is funded in part by members of the Art Center’s Leadership Circle. Kardon’s work began with wood-block and lithographic prints, then moved into figurative paintings. In the late 90s onward he focused on large psychological paintings of family life. Currently, Kardon makes observational paintings on his iPad as well as representational and abstract paintings in oil. Press notes from his exhibition detail descriptions of his work as related to the idea of “perceiving the world through a series of screens and windows.”

The Drawing and Painting class is a high school elective, and most students have some experience beyond basic high school art classes, but many had never worked with charcoal. During the first session Kardon demonstrated the technique to students, each working with large blank sheets. At the start of the second session Kardon stressed the importance of “getting the shape of the head.”

Pointing out student Henry Dul as an example, Kardon said “Look at the distinctive shape of his head; that’s how we recognize people, not through the eyes or the mouth, but how they present their heads. Once you have that shape, you can then figure out how the rest of the features fit into it.” Addressing the work of Charlotte Cleary, who was drawing Dul (the students worked in pairs), Kardon noted: “She already has it in three-dimensional form — that’s great.” 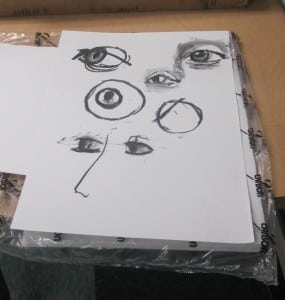 Kardon’s examples of spherical eyes and how to get the pointing effect.

Kardon then discussed eyes: “The thing about eyes is they’re really spheres. While the iris is a circle you don’t usually see the whole circle; the bottom part of the sphere is in shadow, so it’s as if you take a sphere and cut a slice out of it. The pupil gives you an ellipse.” In a bit of art history, Kardon told the class that artists have a convention for constructing eyes that look lifelike and that they were using this convention as early as 600 A.D. in Egyptian tomb art.

“Usually you see the line of the eyelashes and the shaded part under the lower lashes,” he said. “Artists put a highlight on this clear membrane and light bounces off and illuminates the edge of the pupil; that’s what makes the eyes look so convincing. We are hard-wired to understand the geometry of angles and illumination of ellipses, so the pupil is an ellipse at an angle … use the eraser to find different tonalities in the face.”

Roaming the room as students worked after his presentation, Kardon told them “Don’t be afraid to make a big mess. Learning to find the shape is so important, because as soon as you have it you have a place for everything to go. If you have the face right you can give it almost any expression.”

Haldane High School art teacher Tom Locascio was pleased with the workshop, and said that he didn’t usually begin with portraiture when introducing students to a new medium, “because it can be frustrating.   In 30 years of teaching, I’ve learned that some people can’t do watercolors and some can’t do portraits. Most of these kids have some experience with charcoal, so this expands their understanding of it.”

Locascio saw benefits, too, and students weren’t graded on their work. “This frees them; they’re capable, but they haven’t tried it. They become more adventurous and even failure becomes a learning experience rather than a disappointment — plus a lot of the work has turned out just great.” This was the first year for the Visiting Artist program. “We’ve had parents in before but never anything formal,” said Locascio, who also praised Haldane Principal Brian Alm for being “instrumental in helping facilitate this — he really helped connect some of the dots; I can’t thank him enough.”

Students Kelly Vahos, left, and Shauna Ricketts are engrossed in working on their drawings of each other.

Alm in turn was pleased with the program, noting that Garrison Art Center had approached them with the idea, and that “Anything bringing the outside in is a great thing for our kids. This gave students a great opportunity to try creating art in a different medium.”

Cleary, who had never worked with charcoal before, said it was “very educational; it was great,” a sentiment shared by her partner, Dul: “I got a lot out of it.” Another student, Shauna Ricketts, had experience in the medium, but this was a little different. “I’ve never worked with charcoal this soft,” she said, adding, “also it was interesting because I’ve never worked in this short a time period, usually it’s more spread out, and because this wasn’t, it really brought it to life.”

It was far shorter in duration than usual for Kardon as well: “I usually teach this over six hours, at the School of Visual Arts,” he said. “It’s very complex and difficult. I’m trying to emphasize the shape of the head. It’s tough because they’re not really working with someone who is able to stand absolutely still. A lot of this is getting the feel for what charcoal does.  But, if they can get the tools to do that, then when they have more time, they won’t go right for the eyes and lips; they’ll be able to work it out on their own.”

The exhibition of Kardon’s work runs through Nov. 17; galleries are open Tuesday through Sunday from 10 a.m. to 5 p.m. Visit garrisonartcenter.org.