Were you one of those kids who watched a Winter Olympics and was inspired to do more than just wobble on the ice? Was it too hard, and the notion then abandoned? Or, are you actually still pretty good, and looking to get even better? Skating enthusiasts as well as interested novices and the full spectrum in between are all welcome to join the Bear Mountain Figure Skating Club (BMFSC), an organization with a long local history commitment to recreational figure skating. 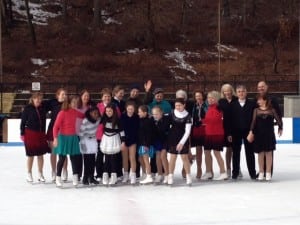 The Bear Mountain Figure Skating Club has members of all ages.

First formed in the 1940s under its current name, the group was called Hessian Lake Figure Skating Club for a stretch before returning to its origins, the better to identify its location. Regular sessions for members’ skates and training are held every Saturday and Sunday from 8:15 to 9:45 a.m. from November through the end of March. On average 30 to 40 people turn out to skate during these times.

Memberships can be taken out on a yearly basis, on a one- or two-day weekly seasonal basis, with different tiers, depending on age. The two days per week cost is $350 per season, while the one-day (Saturday or Sunday may be chosen) is $250. With each option, members can bring a guest for a fee of $20 per session.

Group lessons cost $40 for an eight-week session. Members are required to own a pair of figure skates. Coaches, two on each day, are available to help with fundamentals, and also to give private or group lessons on particular points to members who have made arrangements with them.

On Nov. 16 and 17, the BMFSC will host an Open House, where all are invited, free of charge, to come, find out about the club, work with a coach or two, and interact with friendly club members for assistance. Skates may be rented at the rink for the occasion. For anyone who cannot attend that weekend, there is an open invitation to turn up during member skate time on any weekend, and talk to club members; this is free on a one-time basis. 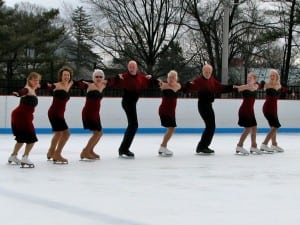 There are no age restrictions for BMFSC membership – children are welcome and there are quite a few – very active – members in their 70s. Though there have been periods with waiting lists, currently the BMFSC is accepting and encouraging new members. Members come from all over, including Orange and Rockland counties, and several, including Linda Magnusson-Rosario and Steve Rosario, from Philipstown.

Magnusson-Rosario calls ice skating a “wonderful sport,” and the Bear Mountain rink “beautiful ice — the most beautiful spot to skate in the Hudson Valley.” Magnusson-Rosario began skating as a child growing up in Brooklyn. “My mom was a figure skater, but we couldn’t afford lessons, so I saved my quarters and went out to Wollman Rink in Prospect Park where I watched the lessons being given.”

As an adult, she became involved in her career and neglected skating, but upon moving to this area, she made her way to the Bear Mountain rink for a public skating session. There, she was spotted by the BMFSC’s Orrin Getz, who came up to her and asked her straight away: “You look like you love to skate — how about joining the club?” From those re-beginnings, Magnusson-Rosario wound up, a couple of years later, winning a bronze medal in ice dancing at the U.S. Figure Skating Adult Nationals.

The BMFSC is both an athletic and a social entity, and has been known to include a few people who may not be out on the ice the entire time. “You can come, skate for 10 minutes then come in to a warm place for coffee and cake,” says Magnusson-Rosario, who urges those curious to “come and try it — a lot of great friendships have been made here.”  Members put on an all-inclusive beginners to professionals show each February, and a group, the Bear Mountain Blades, has taken up synchronized skating and entered competitions. 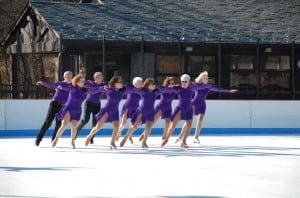 Asked whether having newcomers and experienced skaters out on the ice at the same time sometimes proves difficult, Magnusson-Rosario said “Not at all. It’s very collaborative and we’re all aware of those around us. Lessons are held at the back of the rink, and ice dancers and freestylers adjust their programs.”

The club’s site stresses the positive: “We won’t try to talk you into anything – but you should know that our love for the club is contagious! We’re a friendly group, dedicated to having fun on the ice and improving our skills. We’ve established a culture of support for all levels of skating, with some of our more experienced members providing lessons and practice sessions for interested members.”