The board also took action on a deteriorating dirt lane leading to a housing tract that never materialized. And at the beginning of the session, the formal monthly meeting, three board members criticized the Putnam County News and Recorder newspaper. [See: Town Board Members Blast PCNR]

The question of relocating the post office when the lease at the Foodtown Plaza ends – soon – came up during District 1 Legislator Barbara Scuccimarra’s monthly report. “I could write a book on the post office,” she sighed, referring to ongoing interaction with the U.S. Postal Service. 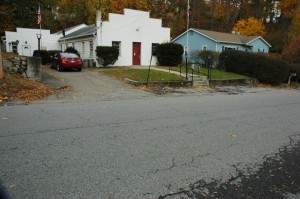 The VFW building on Kemble Avenue has been proposed as a home for the post office.

She said that the USPS intends to use a trailer on a lot at the corner of Benedict Road and Marion Avenue, behind the Foodtown shopping strip, as a temporary post office. In 2012, Marion-Benedict residents objected vociferously to plans to put a new post office on that site.

Scuccimarra predicted residents would not want a temporary trailer parked there either. “That’s not going to happen,” she said. “Those residents are not going to put up with a trailer in their front yard.” When expansion of Foodtown gets underway, the situation “would be a nightmare,” she said.

Scuccimarra said she and Cold Spring Mayor Ralph Falloon, an aide from Rep. Sean Patrick Maloney’s congressional office, and the USPS scheduled a conference phone call for the week of Nov. 11 “to see if we can get them on the right path, because that (lot) is not going to work.”

Supervisor Richard Shea mentioned his recent offer to the USPS of the VFW hall on Kemble Avenue.  “They came down and are actually looking at the VFW because it’s in the village; it could be made available. We would love to save the post office that way,” he said.

Citing traffic concerns, Scuccimarra cautioned that Kemble Avenue area residents “would not be too happy with the post office going down there.”

Councilor John Van Tassel and Shea said traffic access and parking issues could be dealt with on Kemble Avenue. “I think it’s all workable, rather than losing it” [the post office], Van Tassel said.

Shea also noted that some mail-carrier tasks “are already going to Garrison. That’s a foregone conclusion, I’ve been told.” But he agreed with Scuccimarra on the importance of keeping them in Cold Spring, if possible. 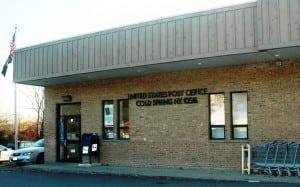 Scuccimarra argued for putting the post office, starting with the temporary trailer, at the Butterfield Hospital redevelopment site. “It’s right across from where the post office is now, it’s on [Route] 9D, the traffic flow would be a lot easier, and when the building is built, which I believe it will be, it will be an easy transition,” she said.

Last year, Butterfield developer Paul Guillaro offered to locate temporary USPS trailers at Butterfield; since 2011 he has talked about including a post office at Butterfield as part of an inter-governmental headquarters in a mixed-use complex.

Nonetheless, as Councilor Dave Merandy reminded Scuccimarra, the drawings for the Butterfield redevelopment do not show a post office with loading docks and similar components. “Why wouldn’t they put that on the plans?” he wondered.

“We’re working on it,” Scuccimarra said, suggesting that Guillaro wants to get the redevelopment approved before conferring with the USPS on details of a structure built to its specifications.

(Conceivably, the nature and accoutrements of a post office at Butterfield could depend on whether all carrier functions are handled from it, or whether some move to Garrison. Also, at various stages of the Butterfield redevelopment design process, the post office has been viewed as a possible occupant of an inter-governmental building.)

“So what milestones have been hit?” Shea asked.

Scuccimarra replied that she had often discussed the matter with County Executive MaryEllen Odell but that the county has been pre-occupied with the 2014 budget.

Recalling the cry, “for months and months,” for help for Philipstown, Montgomery said the county recently cut $155,000 from a $5 million budget for relevant programs. “How that equates to services improving in Philipstown, I don’t know,” Montgomery said. Yet the local need remains “and obviously we’re not addressing it. We’ve gotten nowhere except $155,000 cut in the county budget,” she said.

“It’s a cut in the budget but it’s not a cut in services,” Scuccimarra responded.

Shea added that “on a brighter note” he and Odell recently held a very productive conversation about senior services and road problems. “I think this is something where we can set a benchmark and say, ‘let’s get something done here before the end of the year,’” he told the board. 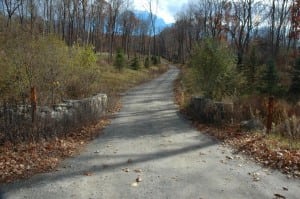 The Town Board moved last week to get Hudson Way paved.

The board assigned, to a private firm, work on a $38,970 road job – paving Hudson Way, a dirt track slashed into the hillside to reach a wooded cul-de-sac off of Route 301, just past Nelsonville.

In 2007, a developer proposed residential construction there, later agreeing to pave Hudson Way to ensure access. But the housing venture failed and only one home stands on the site now. That left the town with the unfinished road.

Earlier this fall, the Town Board claimed the $42,000 the developer had posted as surety for completion of the required improvements. Those funds will pay for finally getting Hudson Way paved.