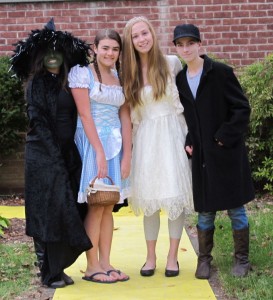 For the past eight years, the courtyard at the Garrison School has been transformed into a graveyard to celebrate “Dead Authors’ Day,” the day when eighth grade English students, under the direction of Ian Berger, eighth grade English Language Arts (ELA) teacher, present stories by great literary figures of the past to the rest of the school.

On Thursday, Oct. 31, the Garrison School eighth graders celebrated Halloween in grand style, dressed up as characters from their authors’ stories to re-enact scenes from the famous works and teach the audience about the authors’ lives.

“Dead Authors’ Day is an important part of our eighth grade curriculum,” said Garrison School Principal, Stephanie Impellittiere. “The ELA component of this program is integrated with the visual arts and drama.”

Garrison School students and faculty members visited each group in the courtyard to enjoy the performances and were treated to the excellent quality of acting that has become the standard for this program.

“That is a great example of what is so special about this event,” remarked Principal Impellittiere. “Often our younger students are inspired by the wonderful performances and they look forward to the day when they will be eighth graders and will have the opportunity to participate in the Dead Authors’ Day.”