The Haldane Central School District has hired an Interim Superintendent of Schools, temporarily filling the position being vacated by Mark Villanti who will retire early in the new year. Trustees approved hiring John Chambers at their Tuesday (Nov. 5) meeting. 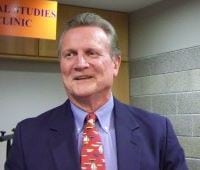 Since 2008, Chambers has worked as an educational consultant, including as an instructor, adviser and fieldwork supervisor at the Future School Leaders Academy at the Bank Street College of Education in New York City. He has also served as a Senior Associate at Hazard, Young, Attea and Associates, the search firm hired by Haldane to find Villanti’s replacement.

Chambers earned a Bachelor of Arts degree from Williams College in Williamstown, Mass., and a Master’s Degree from Harvard University. He also received certification as a school district administrator from SUNY New Paltz.

“He has been a superintendent – and an interim superintendent, Haldane School Board President Gillian Thorpe said of Chambers. “But the ‘wow’ factor for me was that he is a true educational leader. He teaches others how to be a good superintendent.” Thorpe said that High School Principal Brian Alm and Jennifer Wilson, director of special, remedial, and assessment services, had both worked with Chambers in the past and offered very positive feedback.

Villanti, superintendent at Haldane since July 2007, will stay on until Jan. 28, 2014. Chambers will begin his duties on Jan. 21, as part of a contract that runs through June 30, 2014. Chambers will be paid at the same annual rate as Villanti – approximately $239,000, including benefits – but on a per-diem basis without benefits, Thorpe says.